RS Dominar Rigel and the Foxy Force 5 vs PAU Police 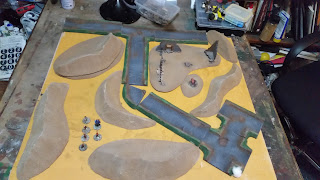 Dominar Rigel and the Foxy Force Five. They were 5 ordinary young criminals until the Dominar recruited them. If you have a problem you need - resolved you might be able to hire this crew.

I've racked my brains as to the manufacturer of these ladies - I thought CP Models or Khurasan, RPE, but no - I'll find them.

PAU (and trailer) are all GZG PAU special forces. Commisar is an armed civilian and the scout a merc.

The more astute reader will have gone "aaah" in a knowing way, having realised that I'm exerting my Modus Operandi* and playtesting the potential participants of my Oz campaign (May 2020) The more worried reader will be dreading the arrival of the Vegemite Mining Association. 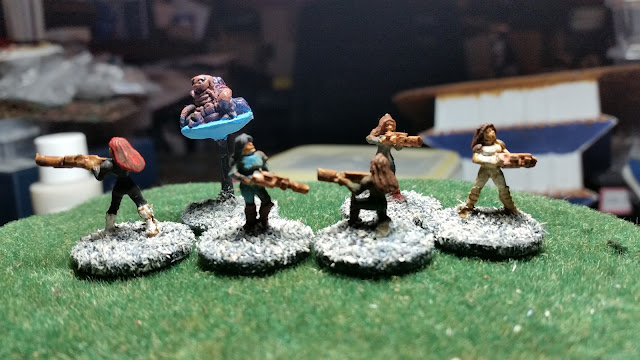 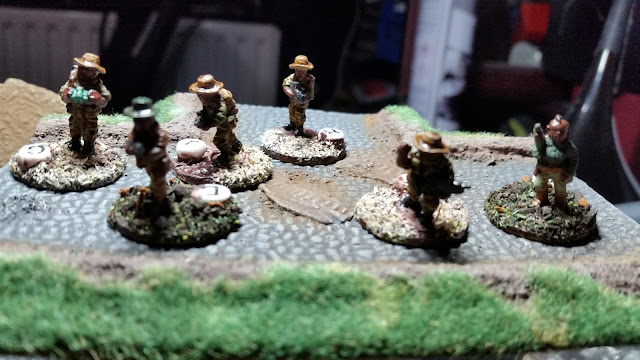 The Game.  Mission 17, make it back to the ship alive.  Here is Environment 8 Defenders home planet.  The Baron and crew have acquired a trolley load of gains.  He's pulling it (half speed) behind his sled.  The mission says his side is deployed & the defenders at a distance.  Amazingly. Tony took the cops.  You think you know people. 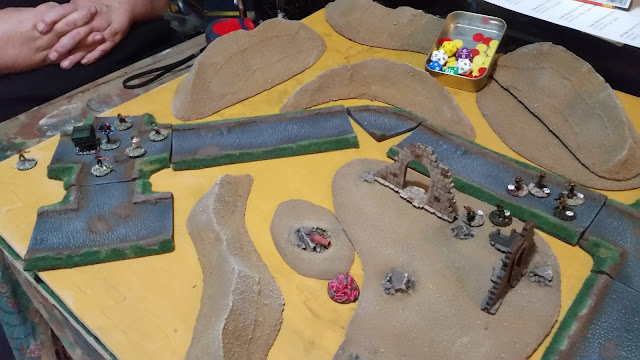 The Baron zooms down the road. 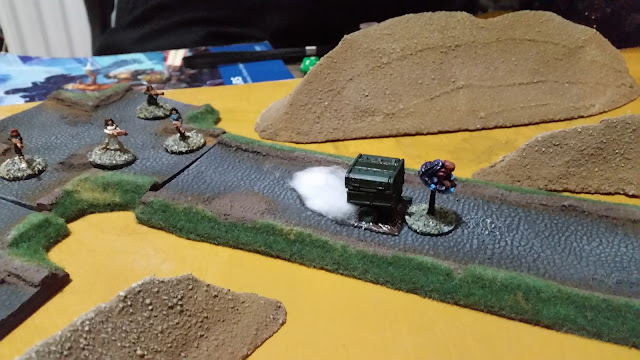 "Stop in the name of the legal law!" 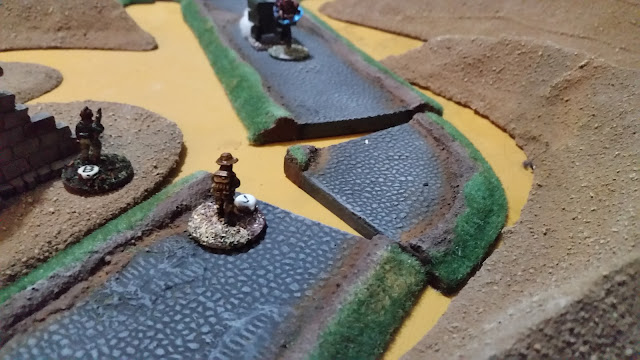 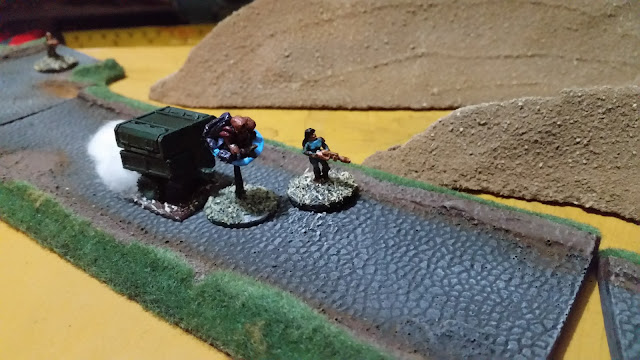 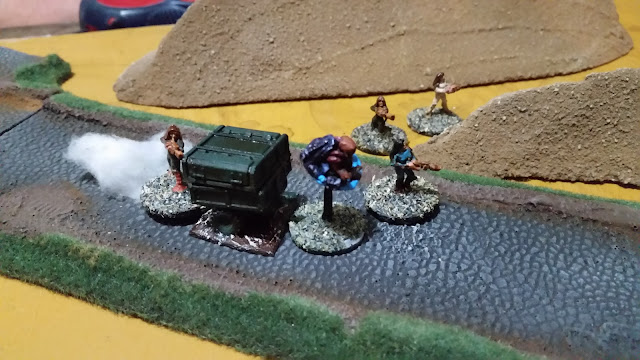 It's going to come down, so the Baron sensibly legs it. 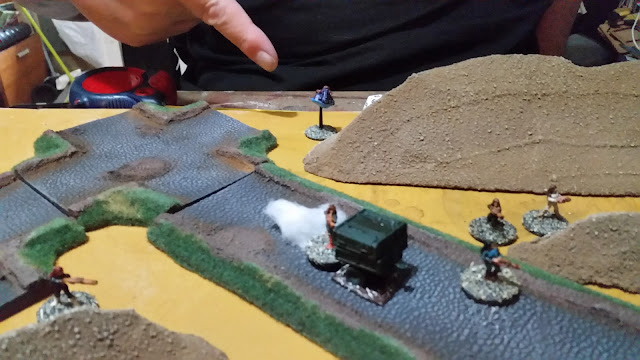 The sergeant tries to outflank. 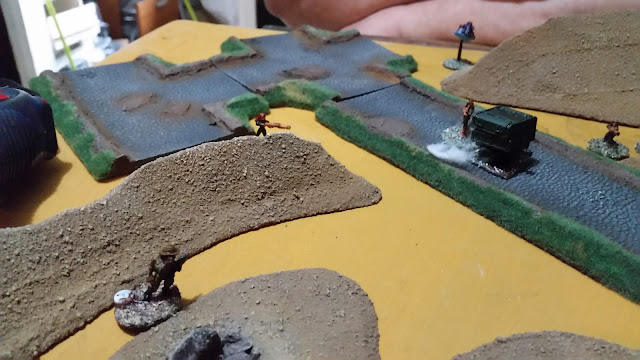 He leaps the dune in one bound, tried a snap shot wot misses.  The Commisar goes forth. 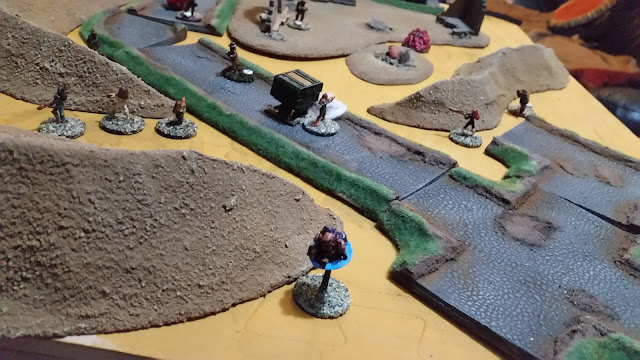 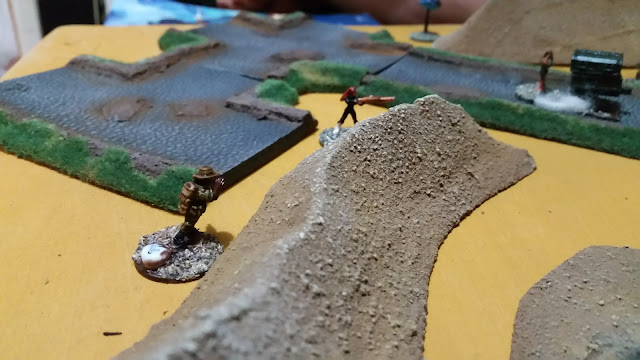 Ms Black is a sniper, not the best or best equipped for this type of encounter.  This game, for once- the dice were with me - embarrassingly so.  She drills a hole through the sergeants head. 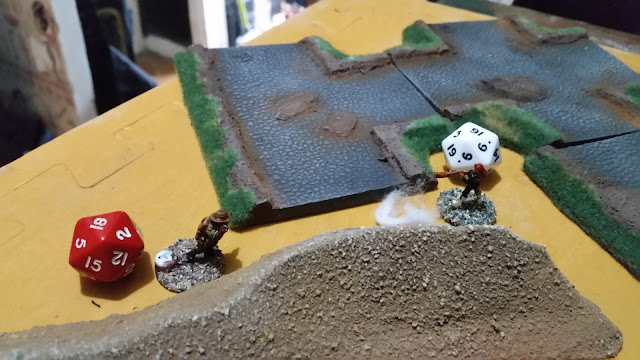 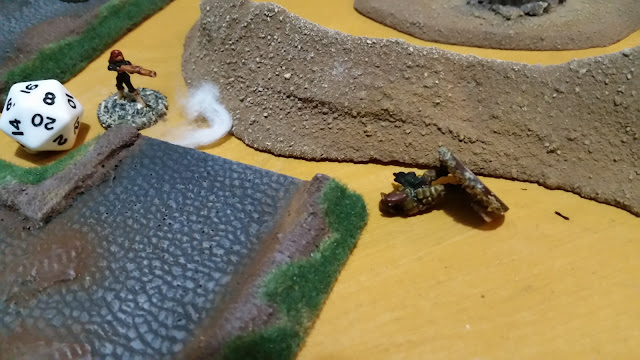 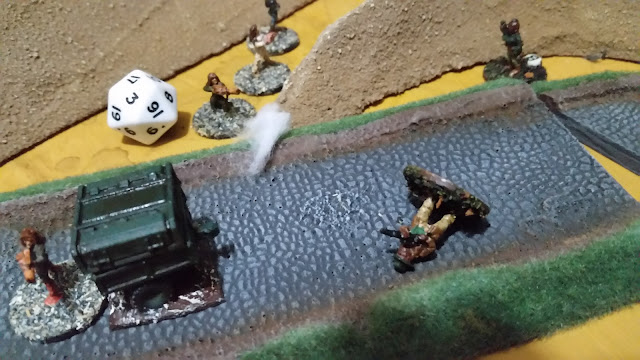 A shot at the tech misses, he hides in the doorway. 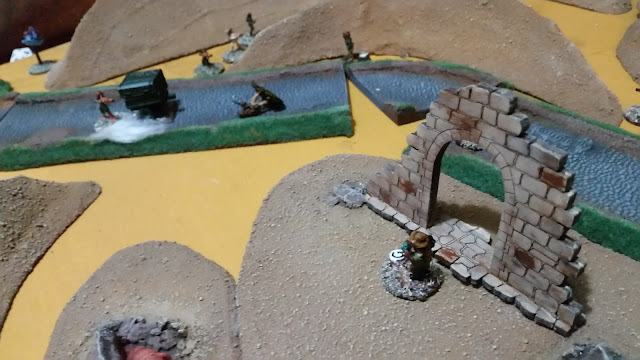 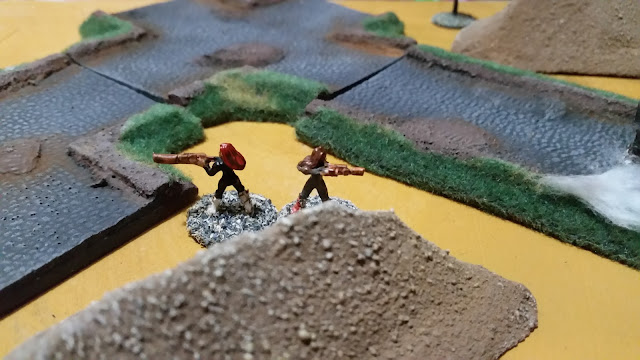 Ms Green gets knocked off her feet by the scout, who tucks herself under the offending trailer.  Ms Blue & White sneak around the flank. 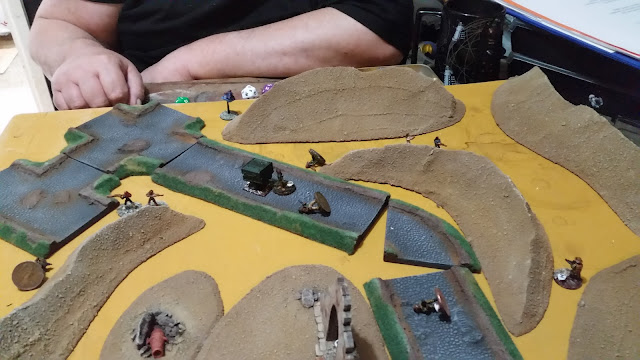 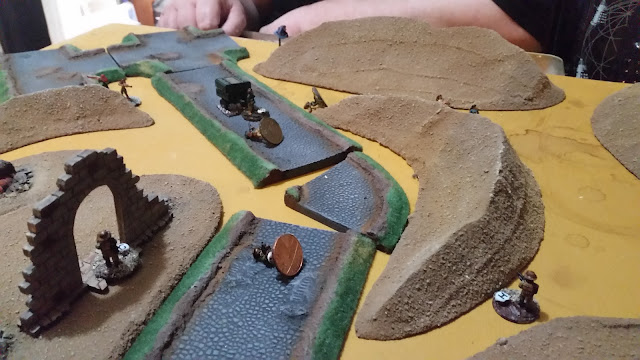 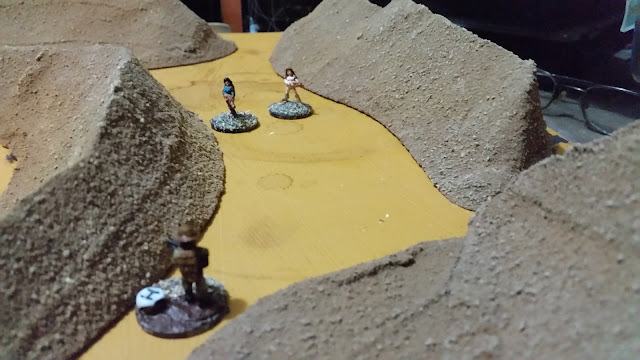 Alas, Ms Green recovers, and the scout is too close for anything but a head shot. 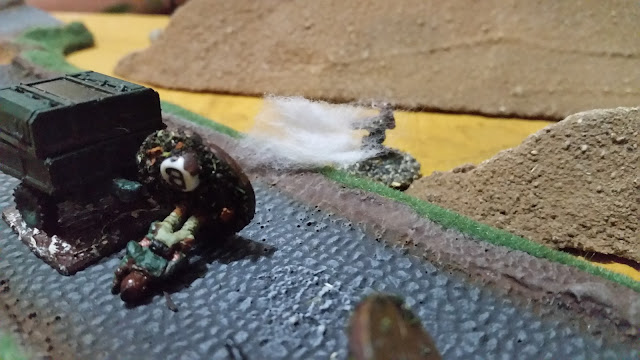 The tech is feeling that the wall is a bit thin- as another poor soul bites the dusty road. 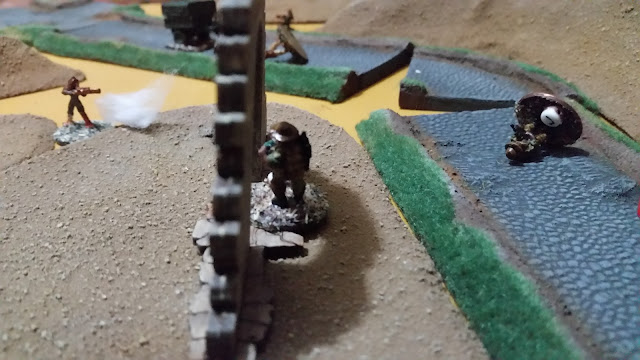 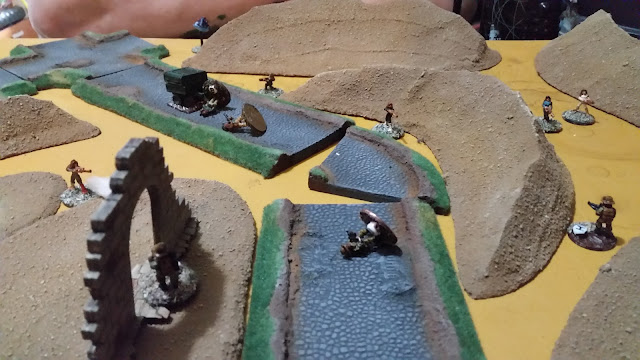 It's on the dice, the Trooper fails (2 pins from last shot, if he had won it could have been a lot different)  Another high roll and the poor chap is outshot and killed. 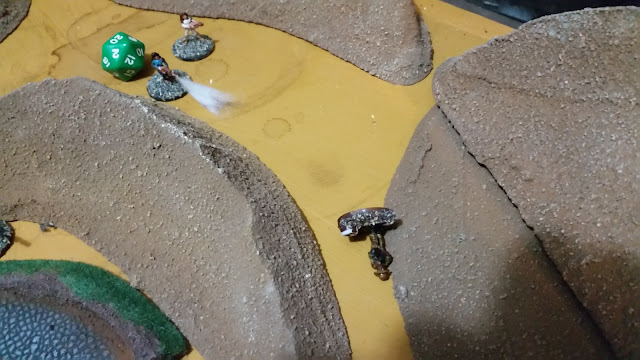 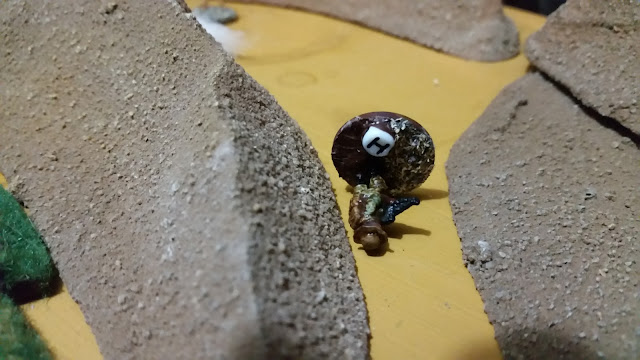 That's a complete win for the Dominar.  The dice were with me.  I thought the balance was, if anywhere, with the cops.  The Dominar is more of a liability.  Foxy's have better armour, cops better weapons, better shots and more effectives.
Yellow pin. 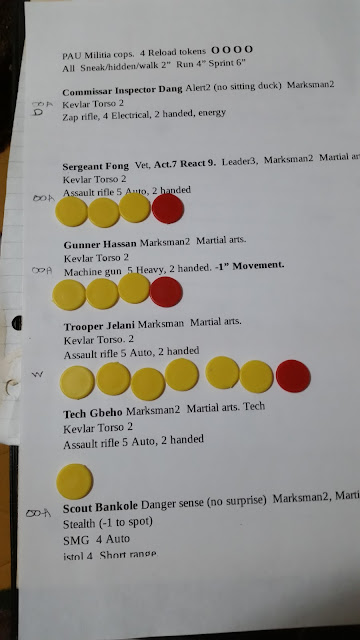 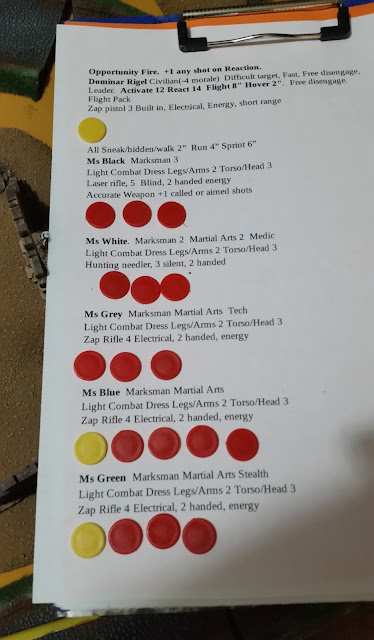