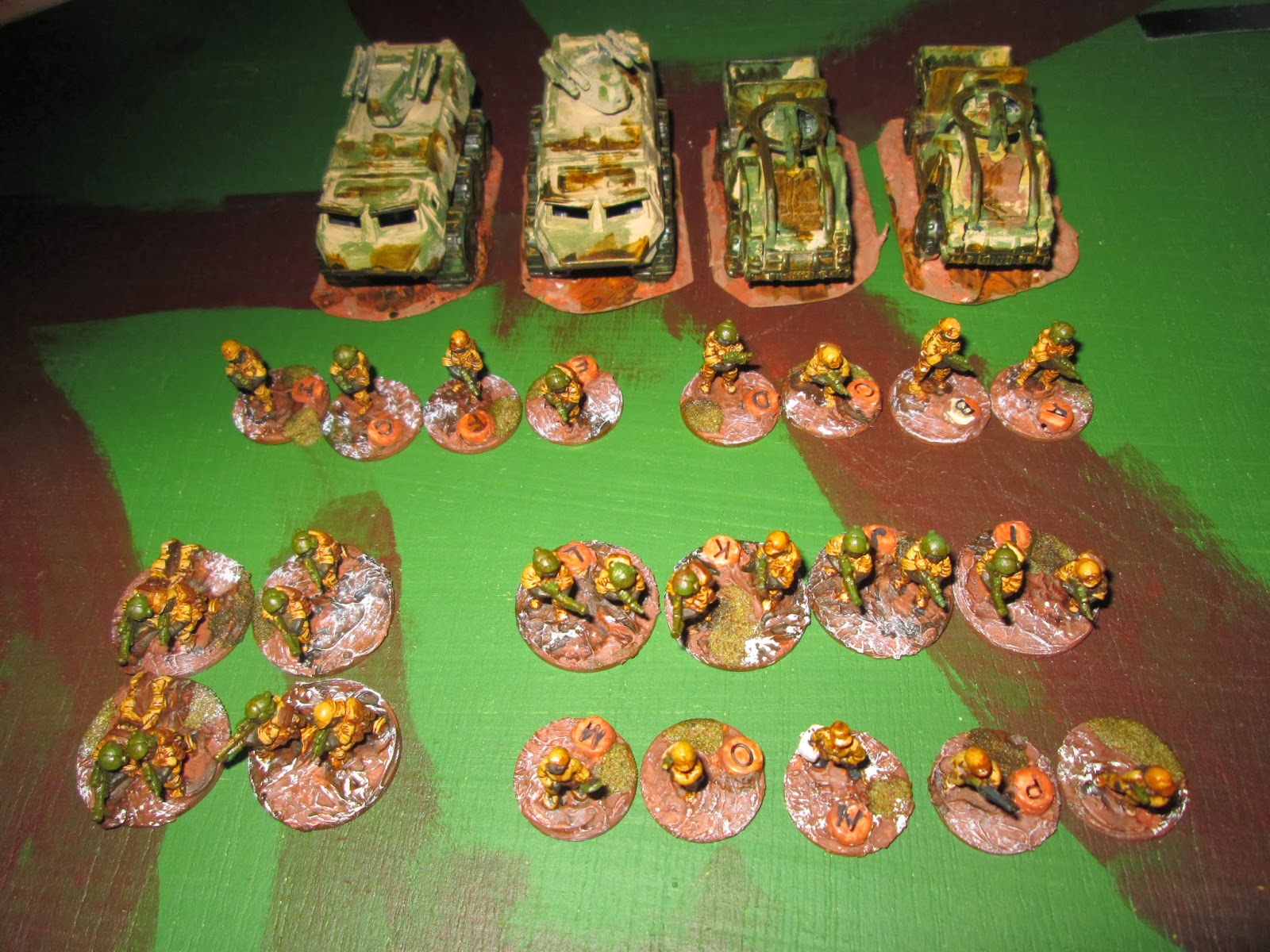 I've wanted to do a small African force since me Hammers Slammers days.

One beef about those games is that everyone seems to ignore the bulk of the indigenous forces and concentrate on the glamorous mercenaries. 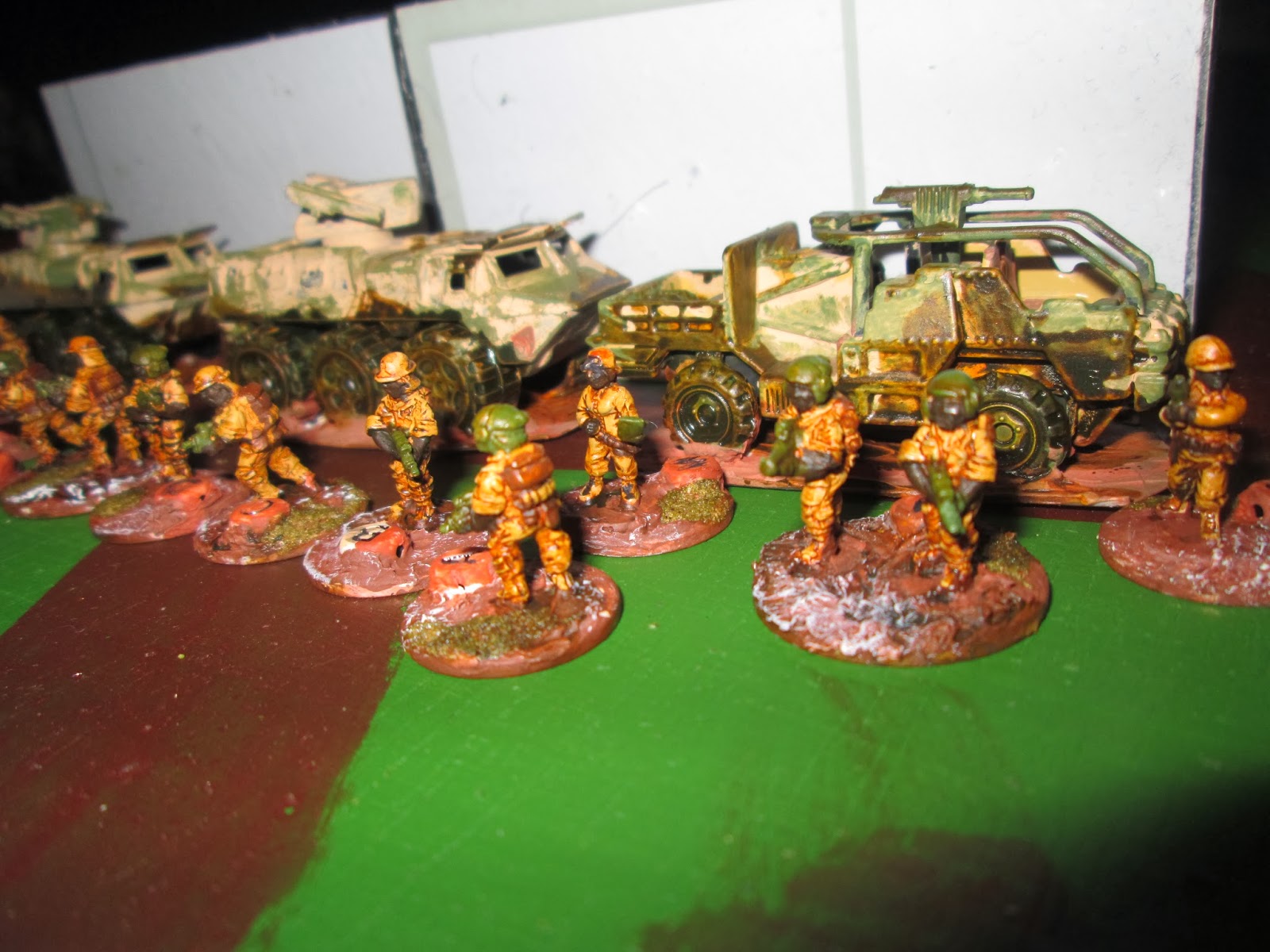 These are your poor bloody infantry who spend their time driving from A to B on dusty roads. Kit is old but mature technology. Modus Operandi is the old Soviet model of “debus, line up, charge!” Which is a load of use as their tasks are manning (Personing? Facilitating? ) checkpoints and patrolling dirt-strips that could only be held by a division of St Trinians Old Girls (Jon, Hint!).

They meet every special forces incursion, fanatic rebels, nasty wotsit escaped from the lab. Escort or are encountered by archaeologist or scientists and technicians who all say “what can go wrong?” and “there's no danger”.


Yes, I know Khurasan have a fantastic range, http://khurasanminiatures.tripod.com/t3200.jpg   but the P&P and VAT restrictions are a pain. So thanks, Jon. At time of writing there are only three packs http://shop.groundzerogames.co.uk/index.php?_a=category&cat_id=136  available, two rifles and support weapons. No snipers or missile troops. Suits me. 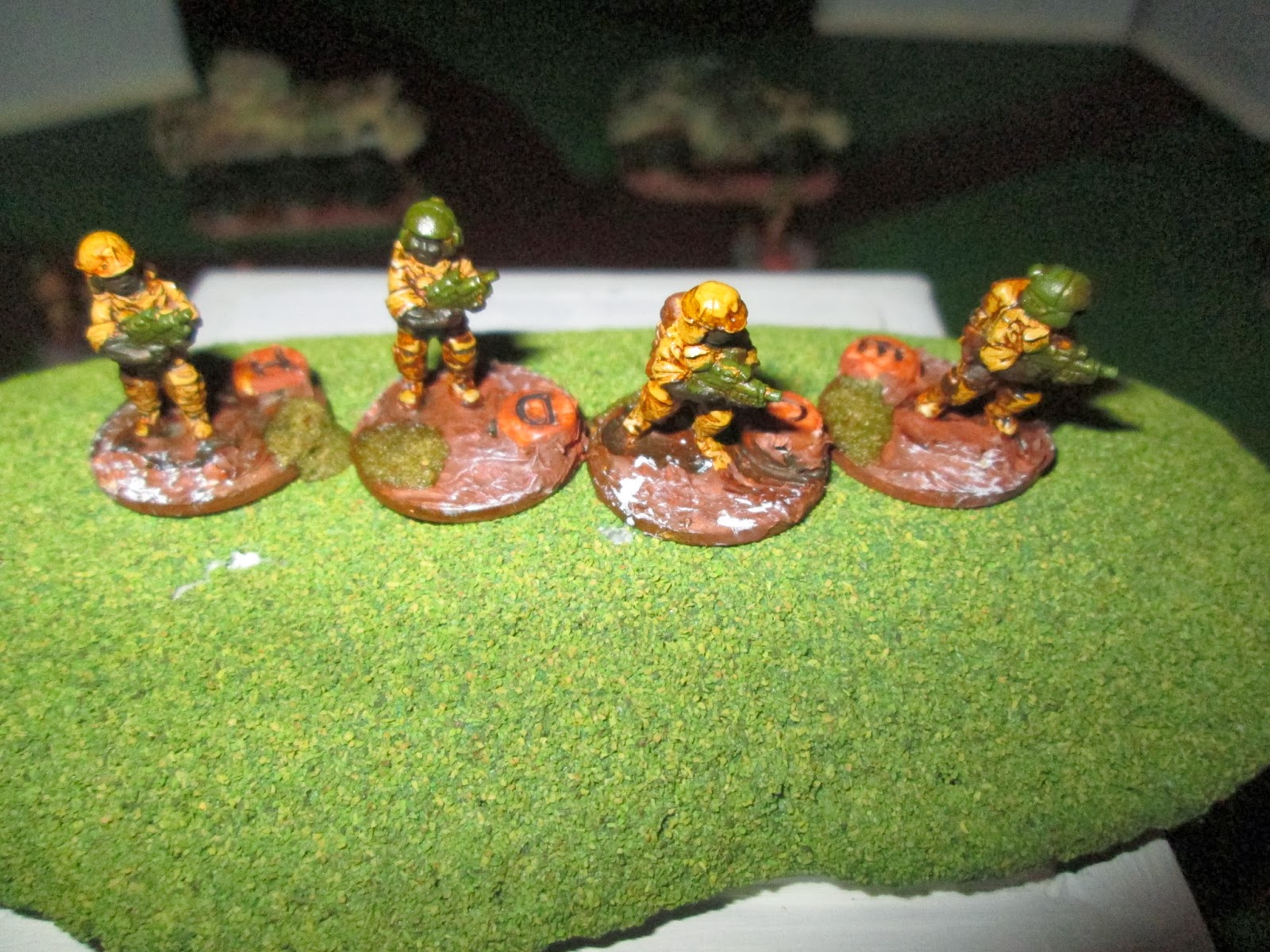 So one of each gives me a sort of squad of eight grunts.

I love the rolled up sleeves - hope you can see the detail on the forearms.

If I'm going to quibble, I'd have liked a machete. 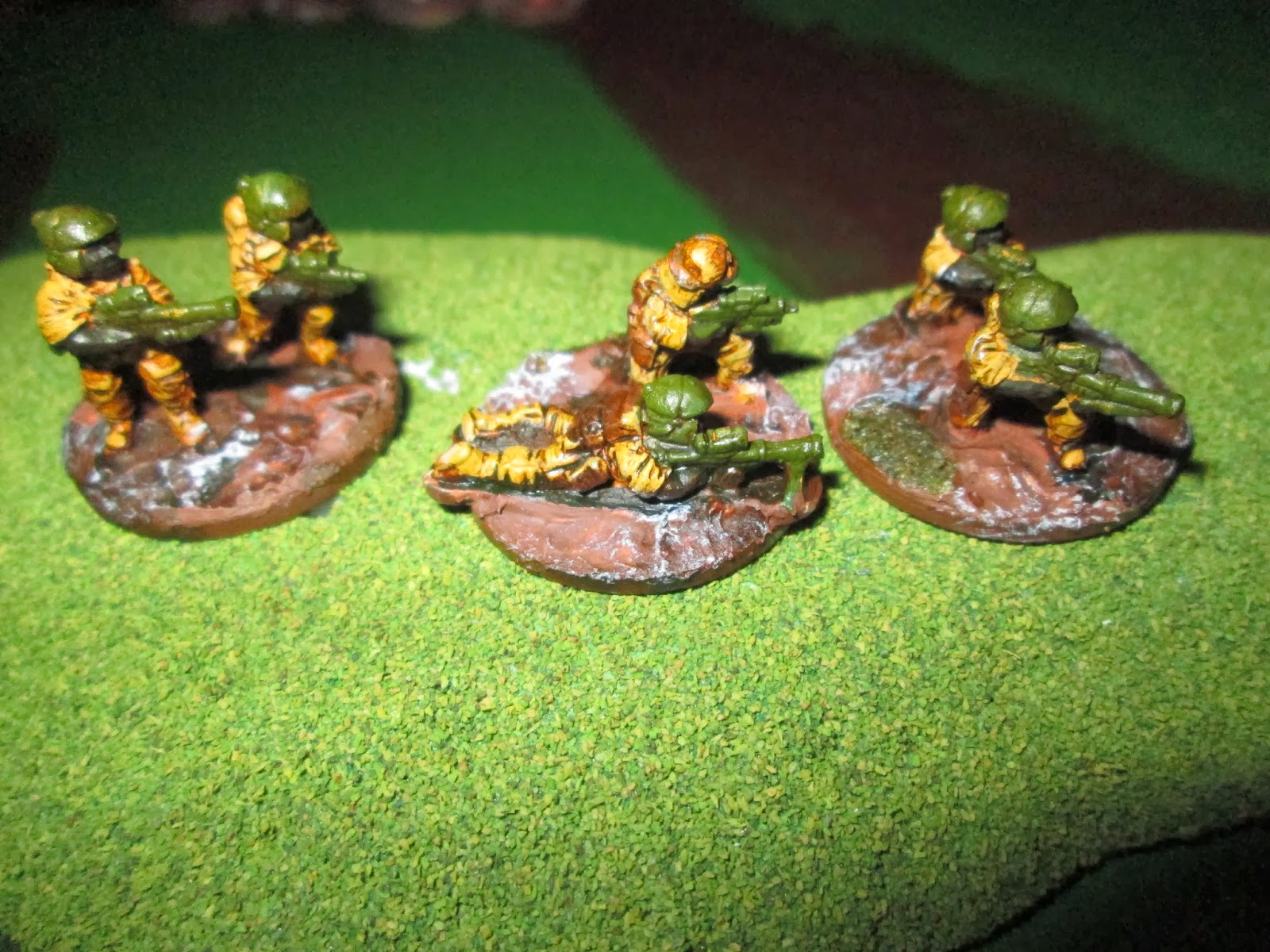 Plus another of machine guns with replacement kneeling and prone to represent different states. 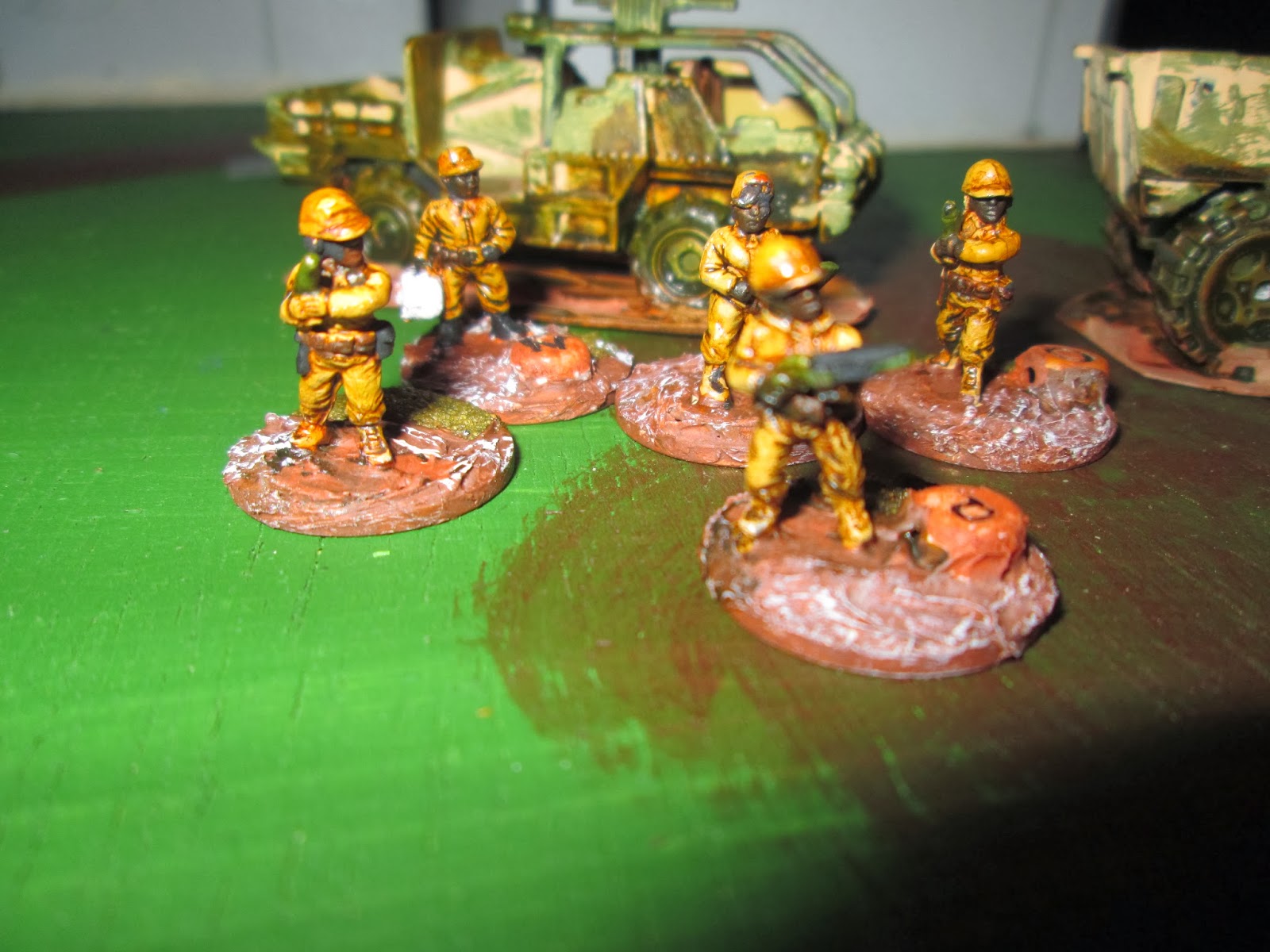 I've added some driver/specialists from the crewmen and colonist packs. 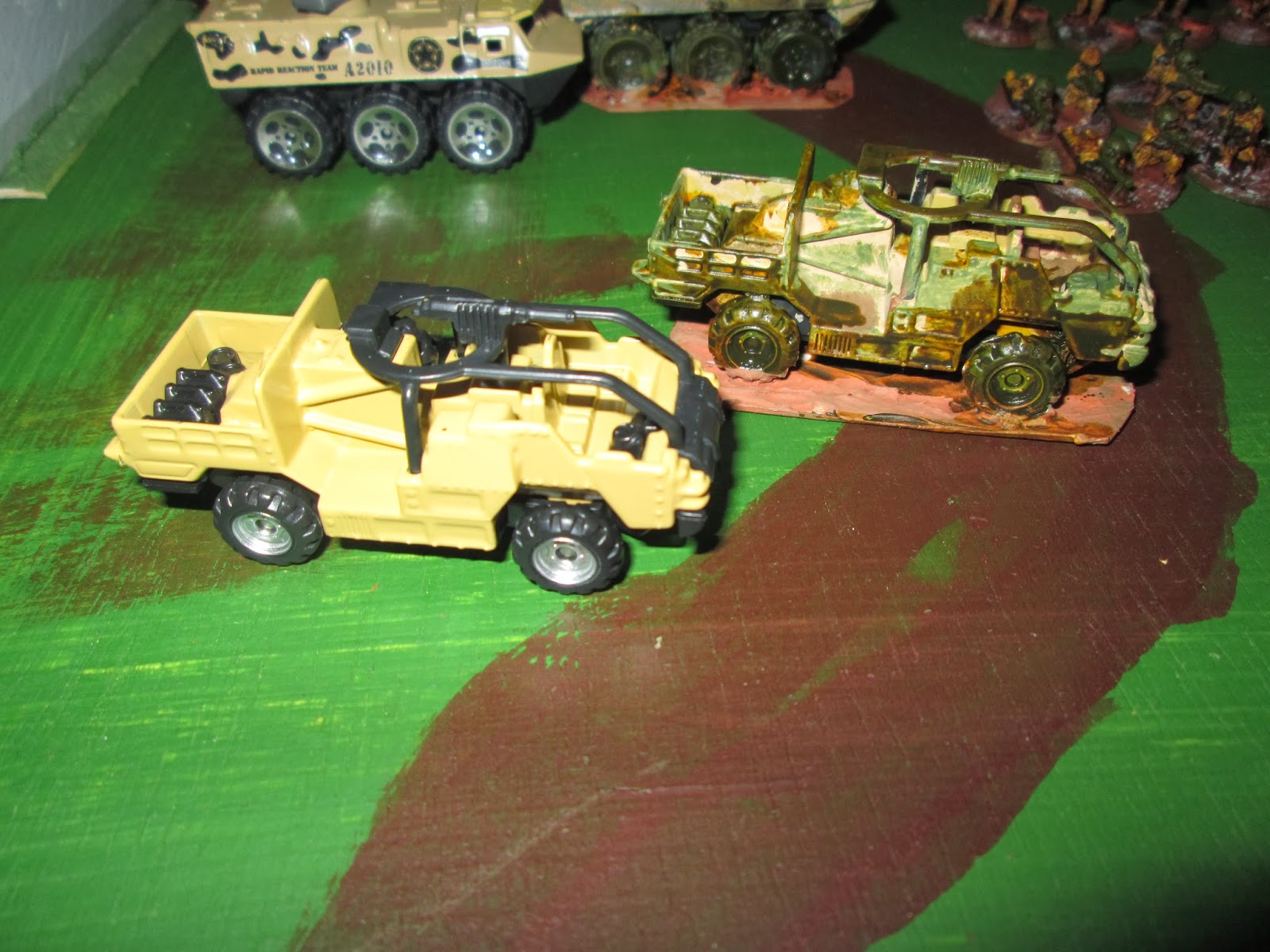 And so to vehicles.

I've just found these Corgi's and I can get more will convert into “posh technicals” using weapons from 15mm.co.uk. 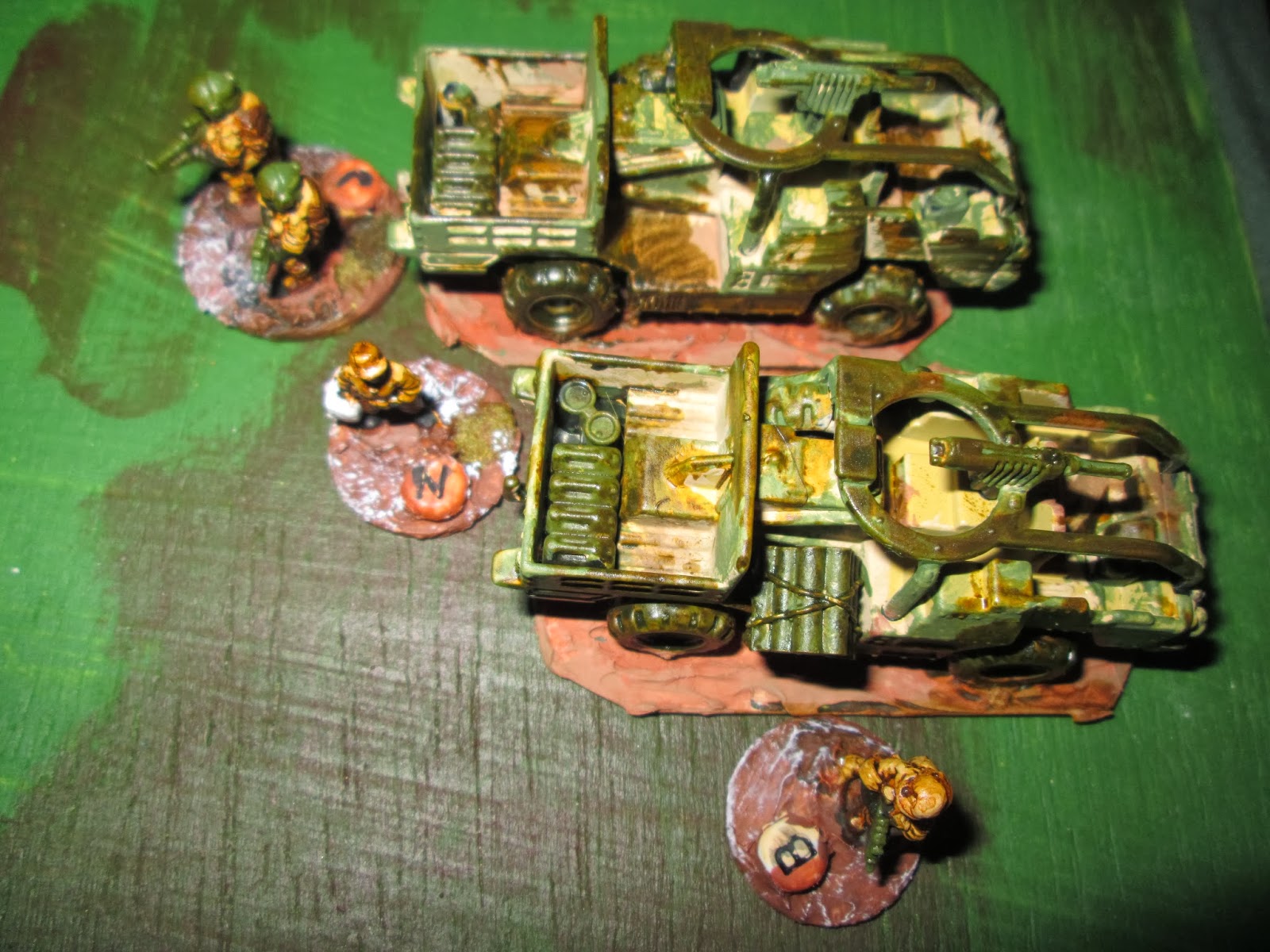 I haven't added the weapon, presuming that it's one of the crew LMG's that's dismounted as needed.

I've also got me eye on Brigade's will-be-released 15mm version of their 6mm neo soviets and African range. http://www.brigademodels.co.uk/6mmSF/Neo-Soviet.html 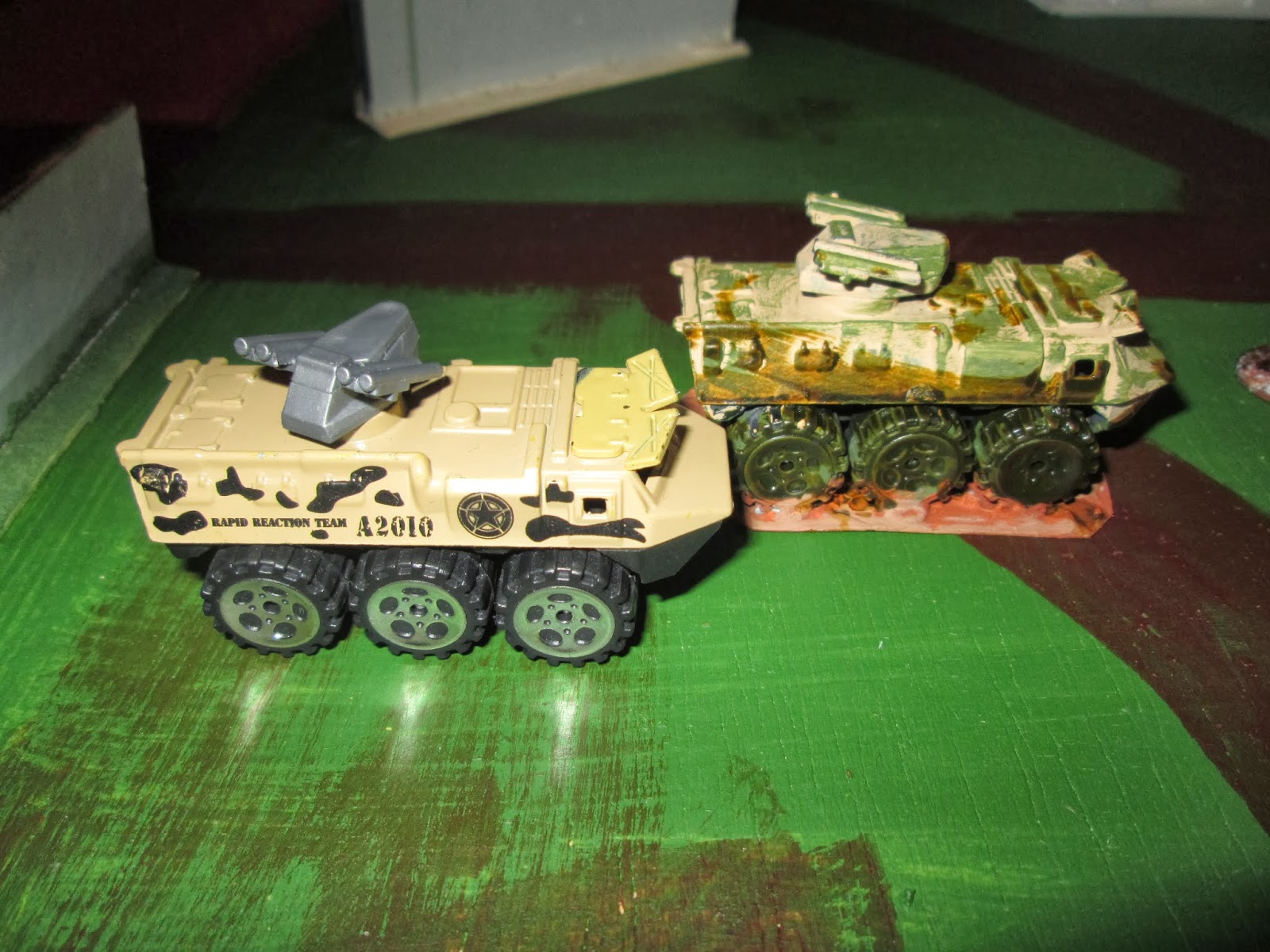 These cheapo APC's, I haven’t decided on a remote turret yet- so no weapon stats.


So for under £20 I've a painted, usable force that isn't all-powerful.

Militia, but not that bad.


Militia cannon fodder as bad as you can get.


* C1 may seem low, but I've used it to represent unready/unwilling rather than untrained. 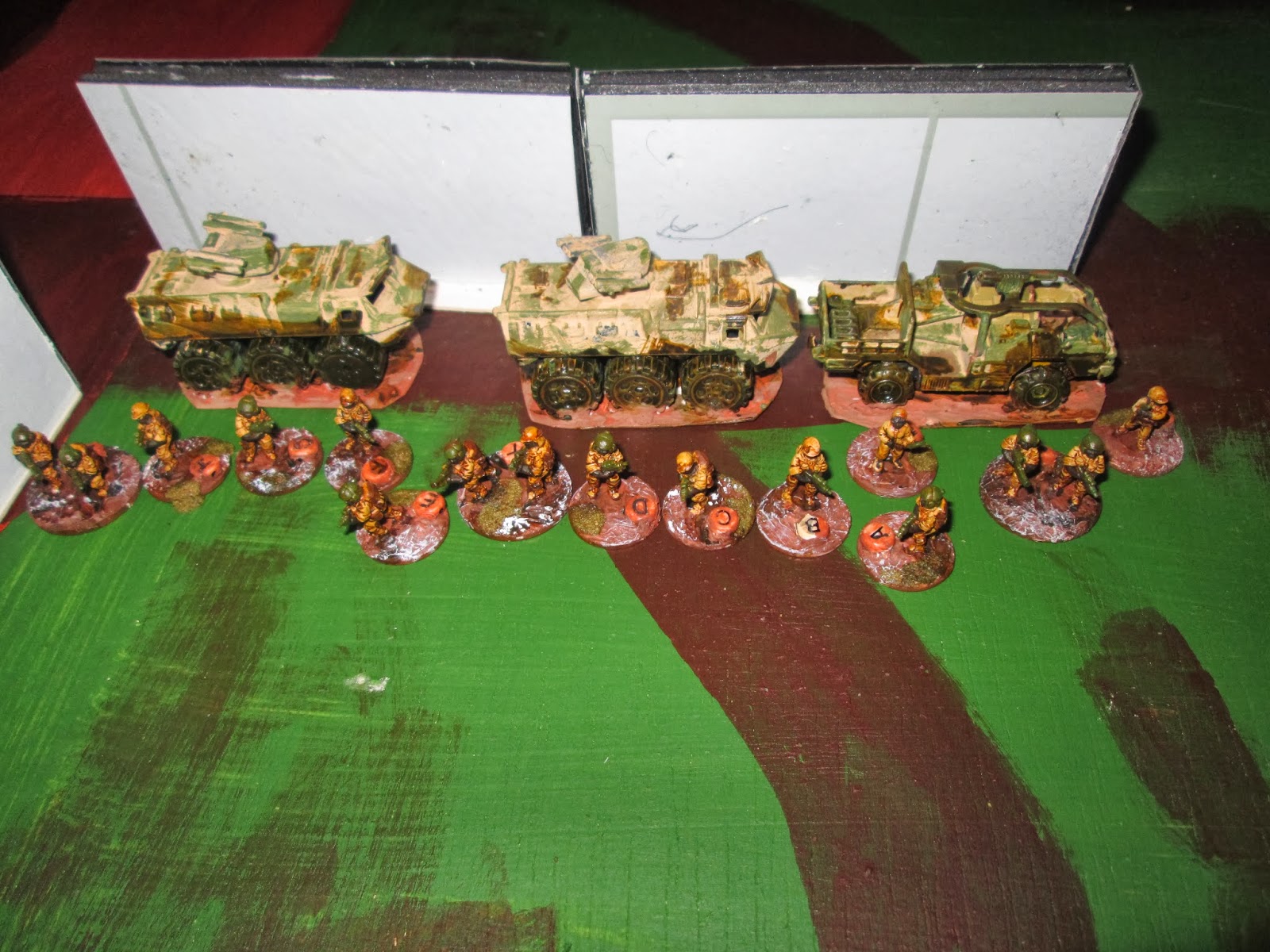 
If you haven’t tried Battlesworn yet, get on with it. Particularly if you've got youngsters, as its innovative use of negotiation has got to be an excellent learning tool.


This is a guts reaction to the rules and a simple adaptation. I haven’t tried this so please feel free to shoot me down in flames and please do better!


My suggestion is that the spells are renamed as two distinctions, the device,weapon and the inherent ability.


Warmage is replaced by Specialist (or Mechanic, Engineer, Fabricator, Weaponsmith) as such may retrieve a device from a fallen enemy for future study, but may not use.


Sorcerer is replaced by Master Specialist (or above). I'd suggest a limitation of 3 spells/abilities.  A  Master can pick up and use an enemy weapon, dice roll for complexity.  Looking down the wrong end and pulling trigger is not an effective method of examination.


Limits on types should be negotiated, as it will be easy to have a strong party of a few, against a rabble controlled by a very powerful master.  One side may employ standard magic as per normal, with the normal limitations per side.


Now the tricky part. As a device can be copied, a soldier may be equipped with same, effectively making its cost “2”. This is opposed to the standard fighter or shooter who still costs 1.


This is my take on the 2003 film version of League of Extraordinary Gentlemen.


Please note that the main participants will rarely be together and have a supporting cast of sailors and mercenaries.


Each of the following cost 2