Trouble 't Mill. A selection of a collection of games for the Return Time.

During the second lockdown I decided to Crack On and assemble some of the scenery bits I've come up with a common theme (not thlem) to hold them together.

Can I have feedback? Ideas? Comments? 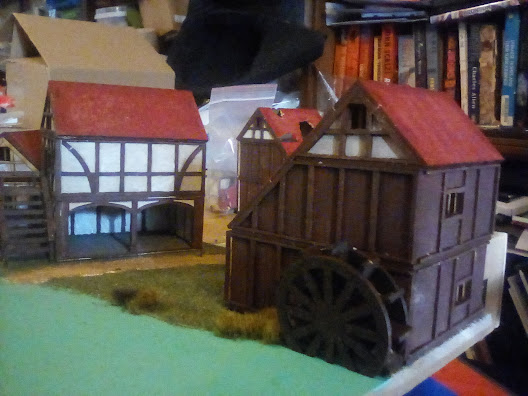 Pirate Plunder! A boat load of pirates attempt to steal Windy the Millers hoard of gold. They paddle the Trestle to pounce! Unfortunately, the mill is just opposite the local quaffery. Flashing Steel.

Follow on game. The local militia, dragoons and customs having become aware of the perfidious pirates and swoop on the local port of Netling. There, the 30-odd pirates have taken the little town into their clutches. First game using Forged In Blood. Flashing Steels larger cos.

Bandits! The harvest is in. At the mill, a tax payment has been raised and is waiting for its escort. There is a thunder of hooves. Bushi no Yume.

Follow on game. Watching from the forest, the Oni ponders when and where to send his forces into battle. (I want to use the 7 Samurai scenery I've been making) Bushi no Yume.

Follow on, follow on – ish. We've used Flashing Blade for Japanese skirmishes- works. Can Forged In blood be used for larger games?

The Clacking contraptions of Baron Von Steele. (known to the Tommy as clacker jacks) Tussle on't Trestle! On a friday afternoon the fiendish forces of the fractious forryner are advancing on the village of Stacked On Trestle. Here the advanced forces of the Royal Engineers will attempt to stall their atrocious advance. There is a mill by the stream. Flying Lead.

Eee By Gum! Eee By Gum! The villagers of Stacked on Trestle have been taken under the fluence of a fiendish Egyptian curse after a cart carrying a mysterious mummy crashes int' village square. They advance with menace on the Manor Farm where Sir Hugh Assum-Ption and his party have the missing amulet of Totenhum Em Hotspir tastefully on the coffee table. Paleo diet with Paleo Pulp cooperative rules.*

Orcs on the lose! Can the locals hold the ford against the gathering storm? Mounted first, goblin archers followed by orc spear. The odd survivor may join the ranks.

Follow on/repeat game. “Sire! The Mc Prunes be coming!!!” Helmet visor lifted, are gulped. “Hoorah!” Messenger looks glum. “But Sire, they're dead--” as if orcs aren't enough, now its the turn of the undead. Both Sellswords & Spellslingers cooperative rules*

* These rules work better with more players up to 6. Using the normal method, opponents are triggered by reaction and/or event.