Hercules the film to Herakles vs Ares, the OGAM game

I got the DVD of Hercules as portrayed by Dwayne (The Rock) Johnson.


Now any film with Dwayne as the lead character, you know what you are going to get, a splendid tongue in cheek action flick with a high body count but not one drop of blood.


The film portrays Hercules living off his legend as the leader of a band of mercenaries/heroes. I'm not going to spoil the plot, suffice to say if you enjoyed the Scorpion King, you'll be happy with this film. There is also scope to take the warband and refight the tasks as different games than the normal telling of the legends would suggest. I pushed all the film into one game, but you could easily make a mini-series out of it.


Timeline – Herakles was part of the Argo crew, so any of those (Jason) could be added. He is pre Troy so no Achilles or Odysseus, please. As for enemies, he took on most of the monsters, Chiron and Hyppolyte. His nemesis was Hera (a woman scorned is bad enough-) so any of her “faction” could be persuaded to step up, the big boys Ares, Poseidon or Apollo. Zeus and Athena (with borrowed lightning) are obvious candidates if going against someone from another pantheon. He successfully took on the Hittite client Troy so going against Egypt is no big leap of imagination. I'm planning a Song of Spear and Shield and OGAM series, using roughly the same troops to fight each of the Trojan allies and their gods in turn. The real conningsewers will have noted my use of Khurasans Conan. I added a shield, but have yet to find or make a suitable club. And yes, I know that the labris axe is forbidden-.


We need a god a “stand in” for Zeus, taking a rather back stage role for once. Artemis is the “heaviest hitter” I'd suggest, Hephaistos is a possibility (particularly against Ares) but he'd want to field his automatons. So I'm going to plug for Hermes, who is Zeus's “PA”.

Suggested 900 point game based on the film. As you can see, in 15mm on our 28” table is sufficient. Please note that rather than using CD movement bases, I'm using warbases penny and 2p irregular bases for open order infantry by leaving a slot free. I like the look the same gave my undead. I mount my heroes on 2p's as a rule, but I forgot to buy the single bases. For this game I had to use what would fit. I hate these Perry's gods, they are bland and more like statues. I've started to rebase them in these bases from Brigade Models.

These are an interesting balance, but it makes the legends work like heroes-. Ares gains from having a large force so having free units who can invoke. If you enlarge the points, the bad guys can gain more generic heroes.


*I'm ignoring the either-or rule as I'm using the hero as a mock-centaur rather than true cavalry. Please feel free to ignore my ignore. 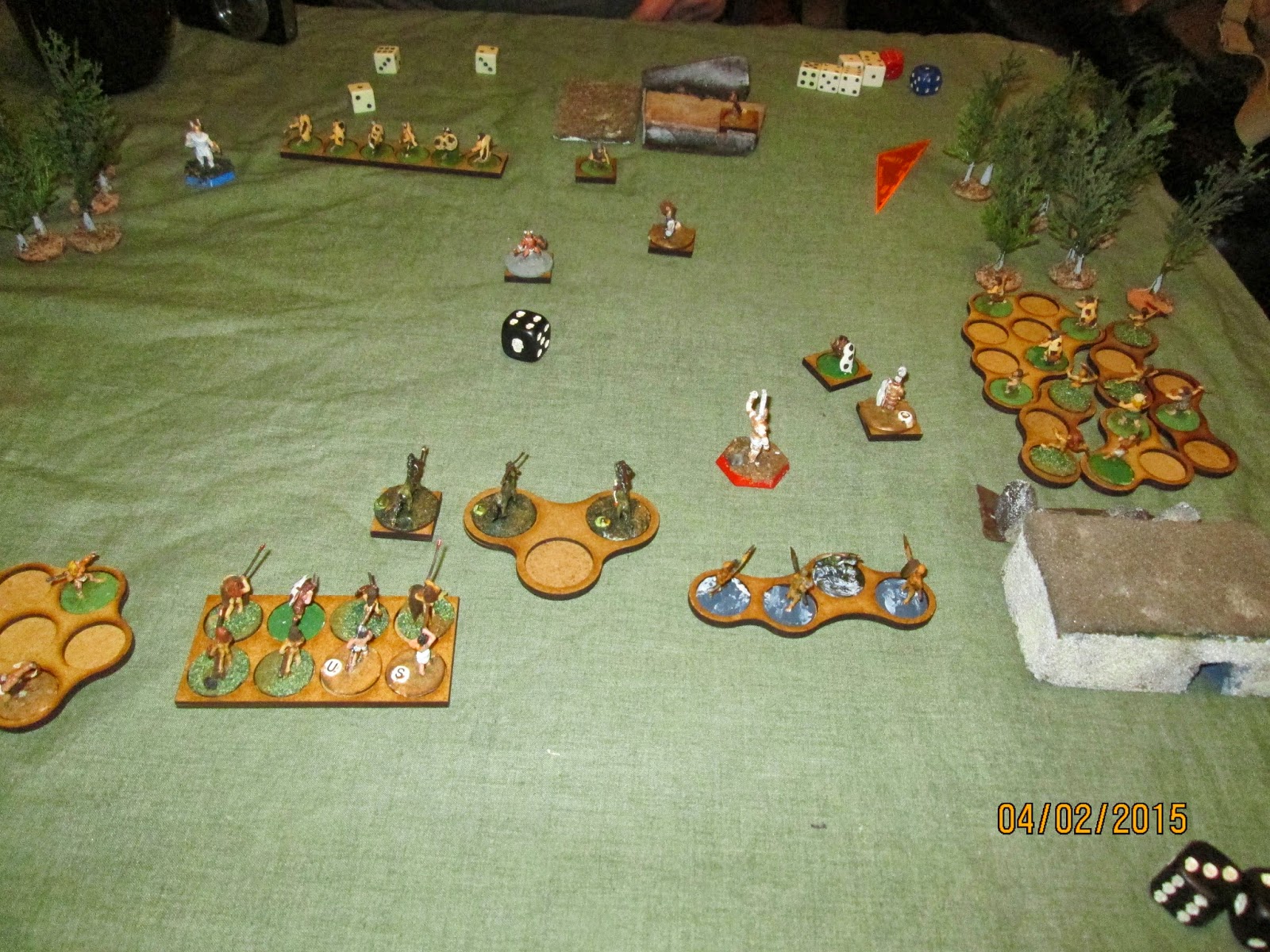 The game. As you can see, I set the scenery as a U, intending Dwaynes- oops Hermes force occupying the base. Tony took Hermes. My plan was to pin Herakles with my cavalry then reinforce with one or both legends and/or Ares while my skirmishers and undead slowed up the other heroes. That worked, except he pummelled one and chased the other back. 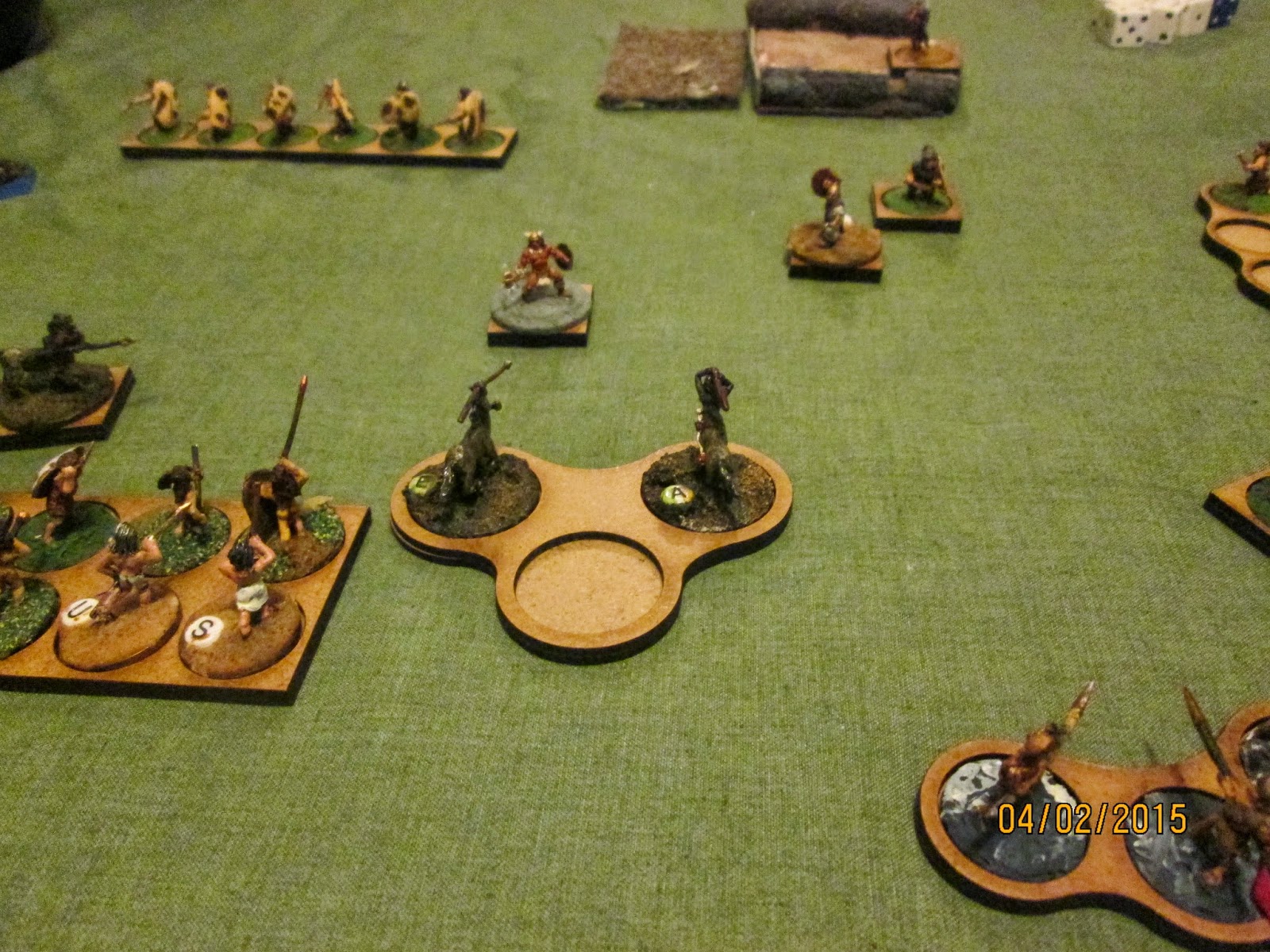 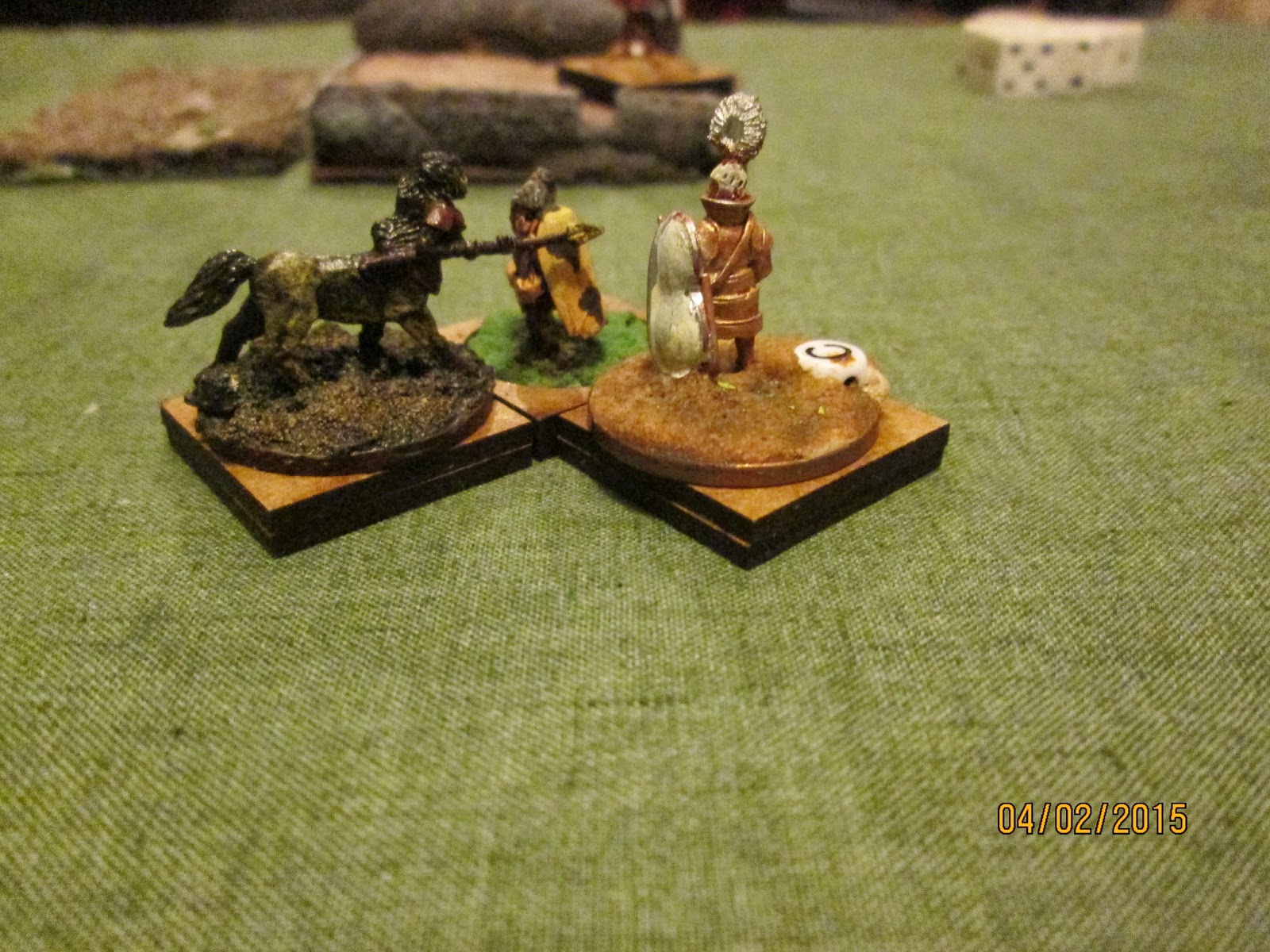 My undead stalled repeatedly. Herakles then moved on to my spear, knocking them for 6. In the centre my hero attacked Tydeus, promptly dispatched, to my surprise. 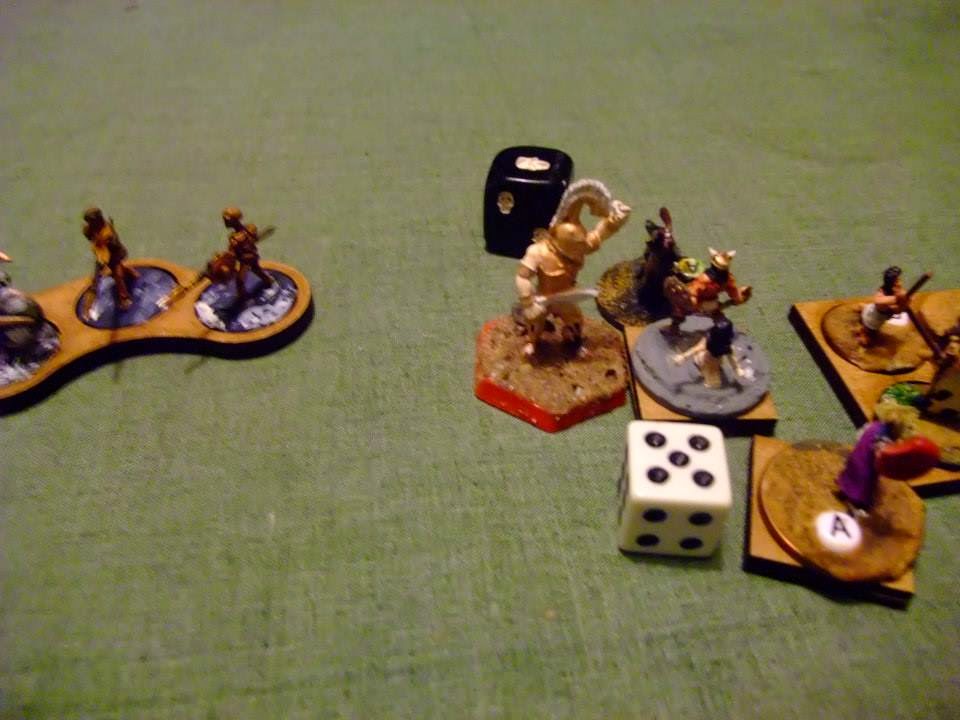 Then my two legends attacked Autolycus, who dispatched both! On my left, Tony's spear attacked my archers, who put up a very spirited defence.

Now Ares in his wrath moved on the big man only to be knocked back by this 5:1 result.

He turns on Hermes, who suffers a 6:1 defeat. The god is dead! 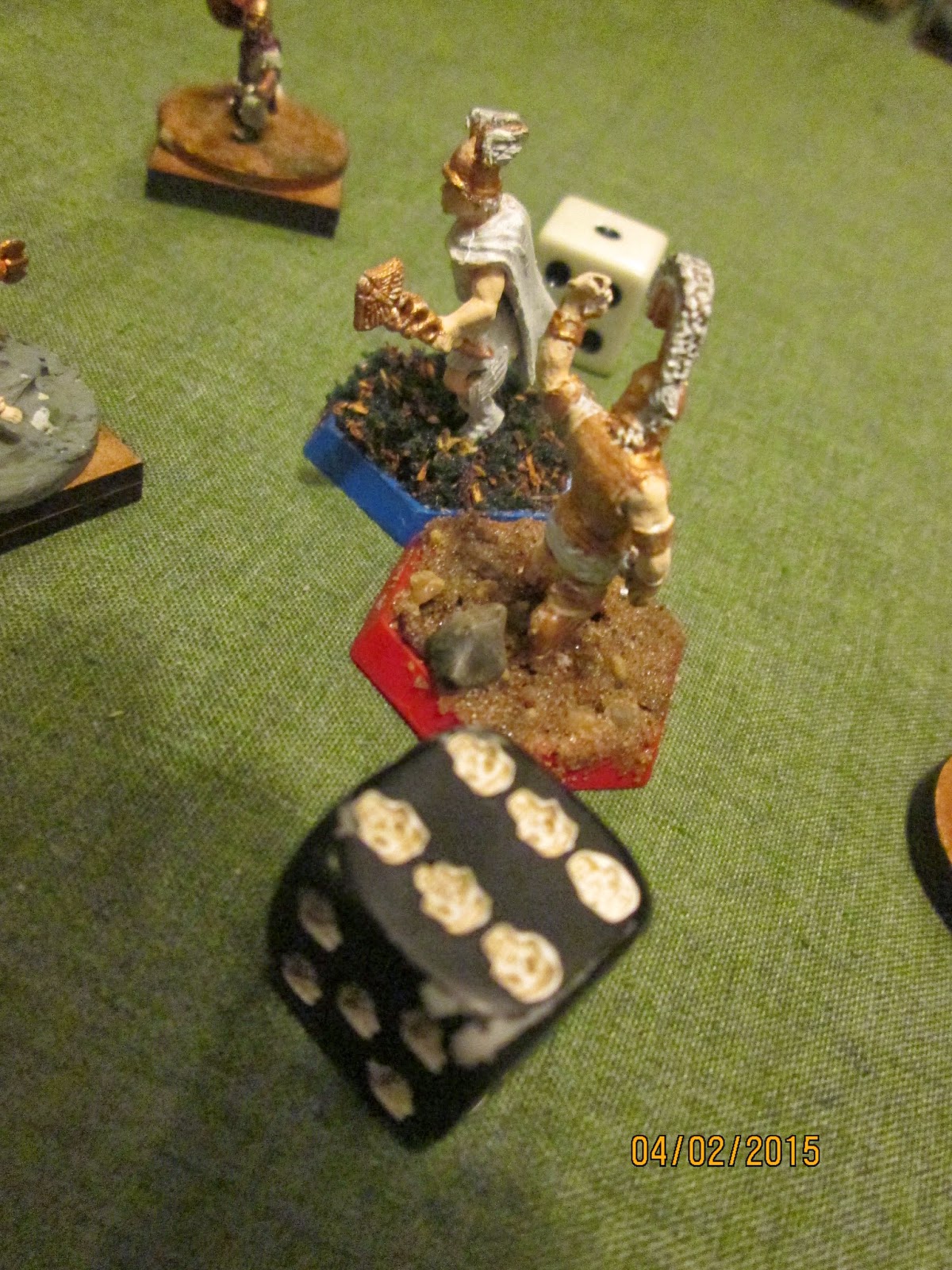 Ares stalks the other heroes, who go down one after another. Those 2 dice throws above decided it.
If Ares had died (so close!) I would have lost. If Hermes had lived, who knows?


Hindsight. Hermes is worth using. He's not a big hitter but if used to support legends-go there, add the pluses then leave. Mutual support, he protects his legend from the other god and vies versa. Use him to knock units down to below invocation level then move on.


When you have more mortals, try just using 1 activation. Keep it slow and even, keep your cheapest unit back and get them preying. If I'd divided my javelin into 4,4,3 as opposed to 3, 8 I would have had a unit on each flank, archers in the middle and kept a 4 as a “tactical reserve”.


We enjoyed playing this, presented both sides with different problems. Now get out the lead and play something similar! If you don't have the right figures do it as a Roman gladiatorial or Medieval pageant. 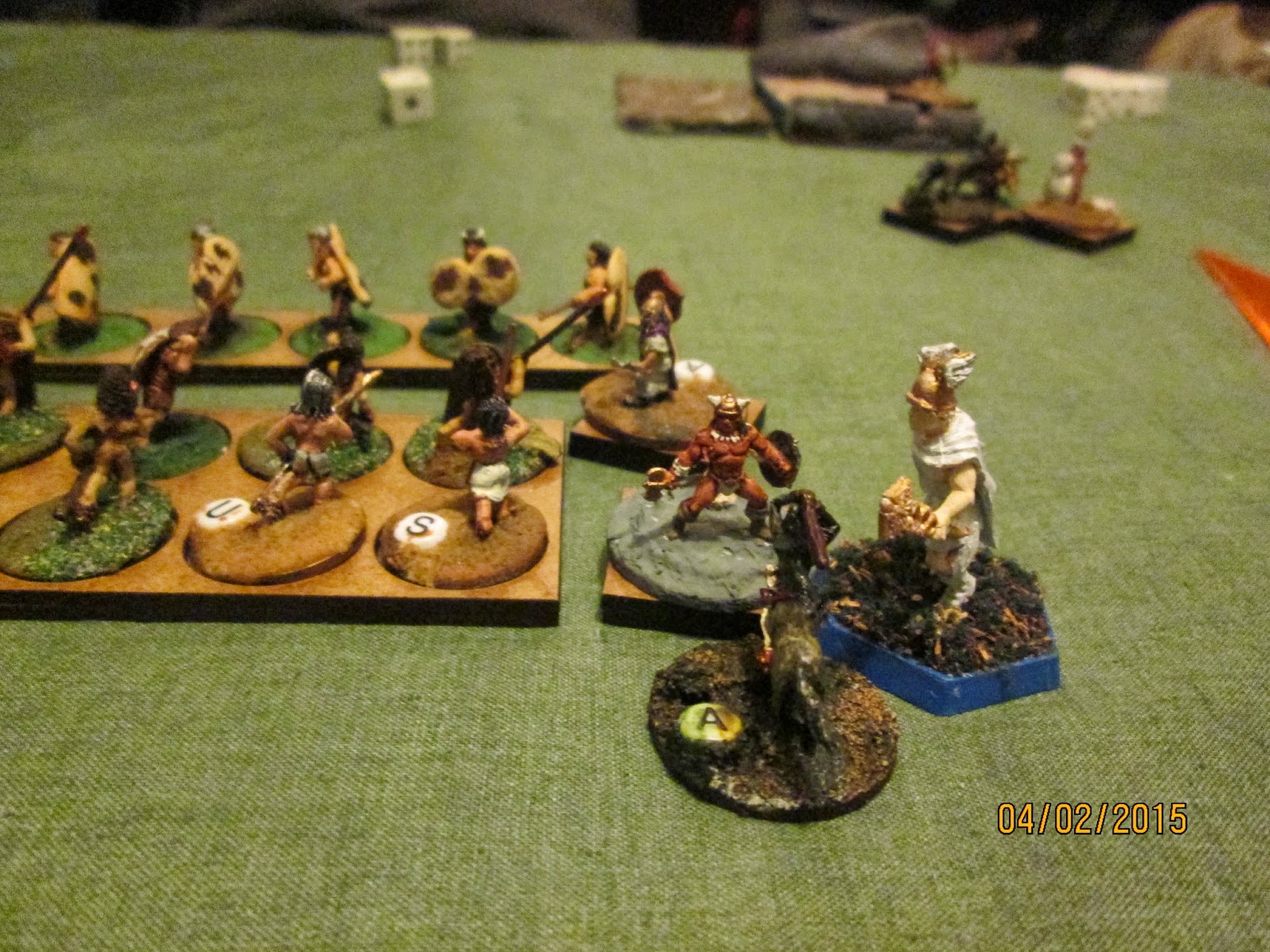 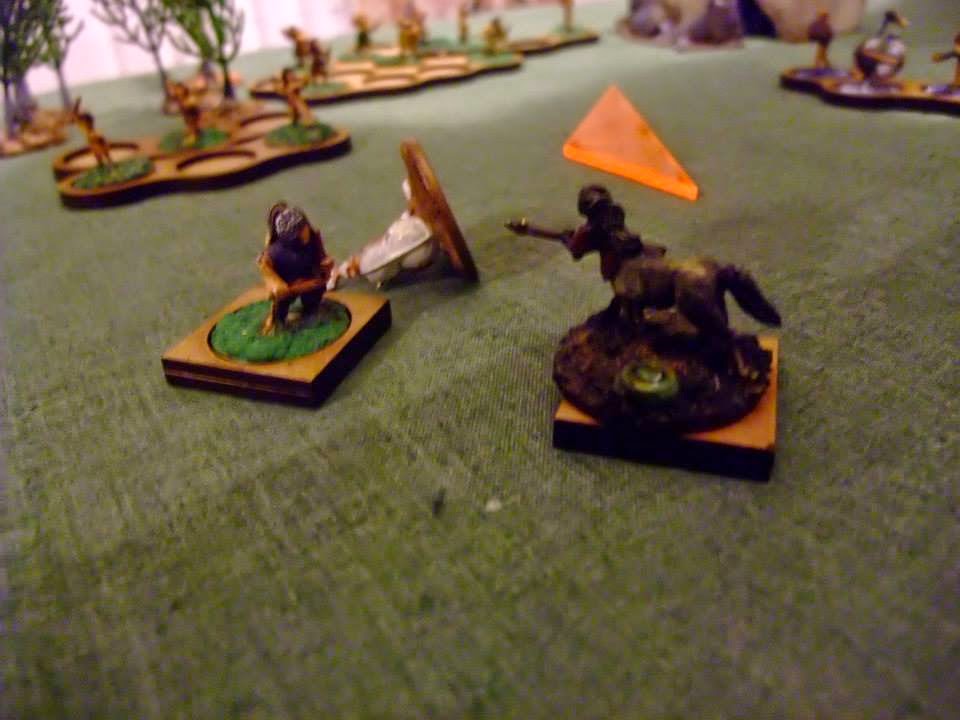 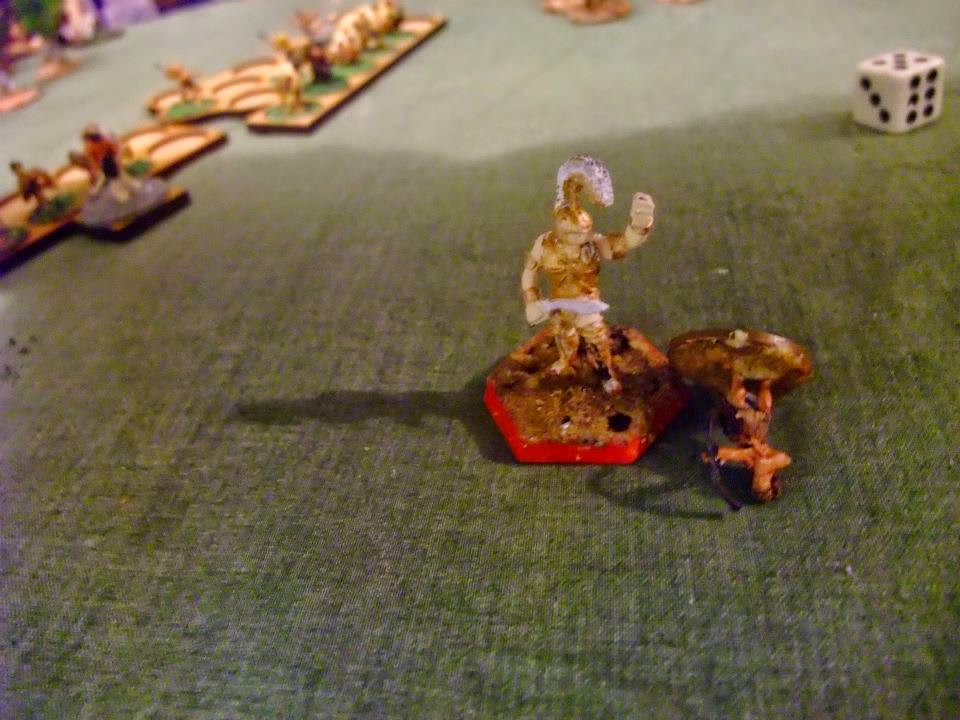 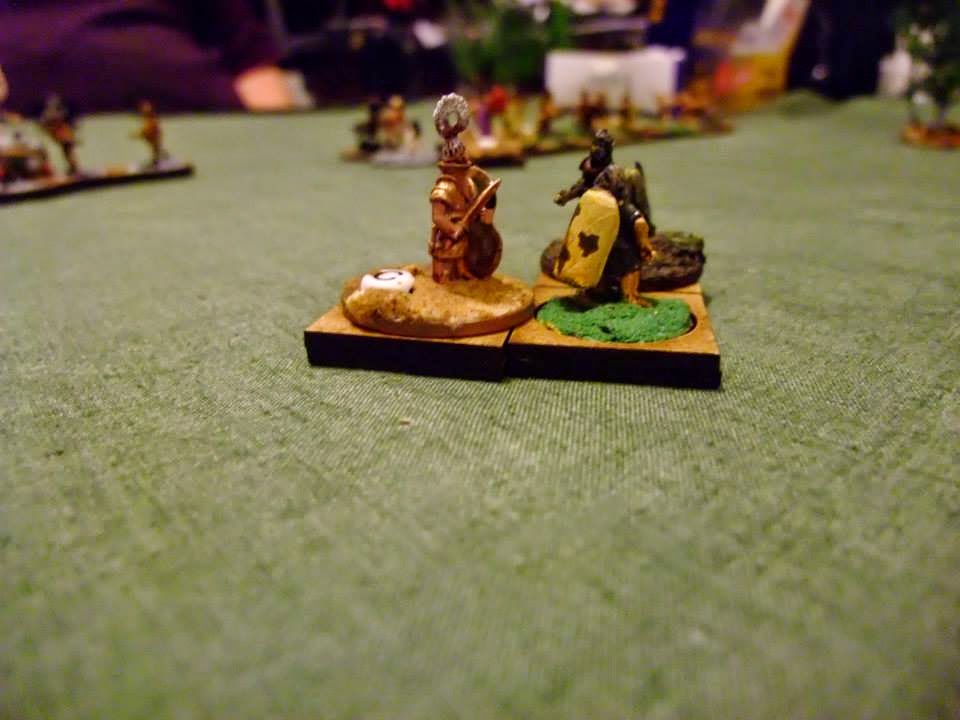 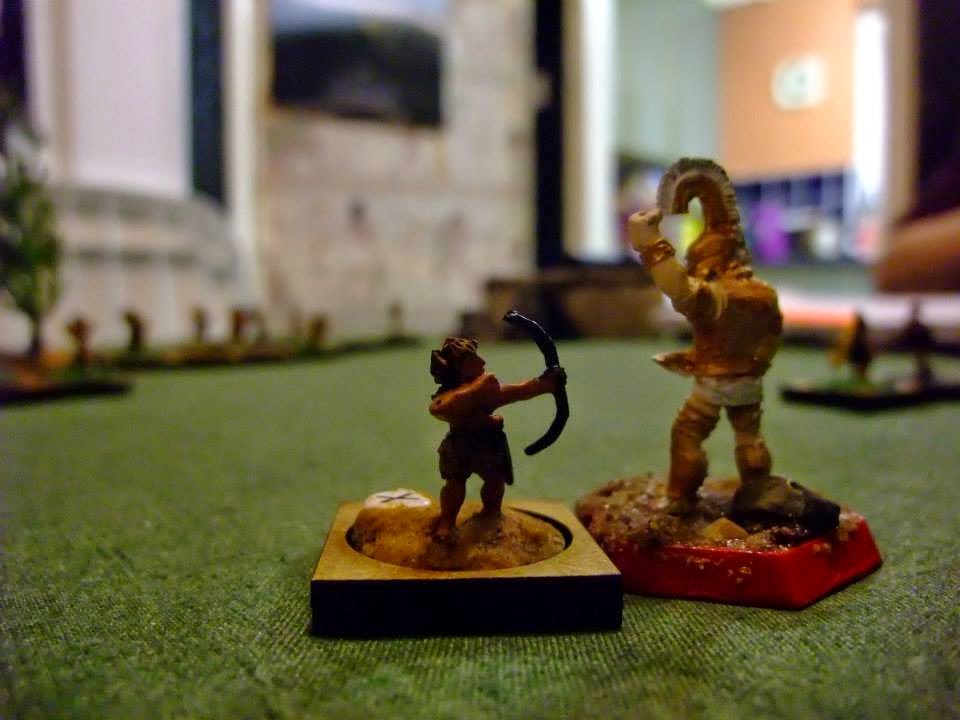 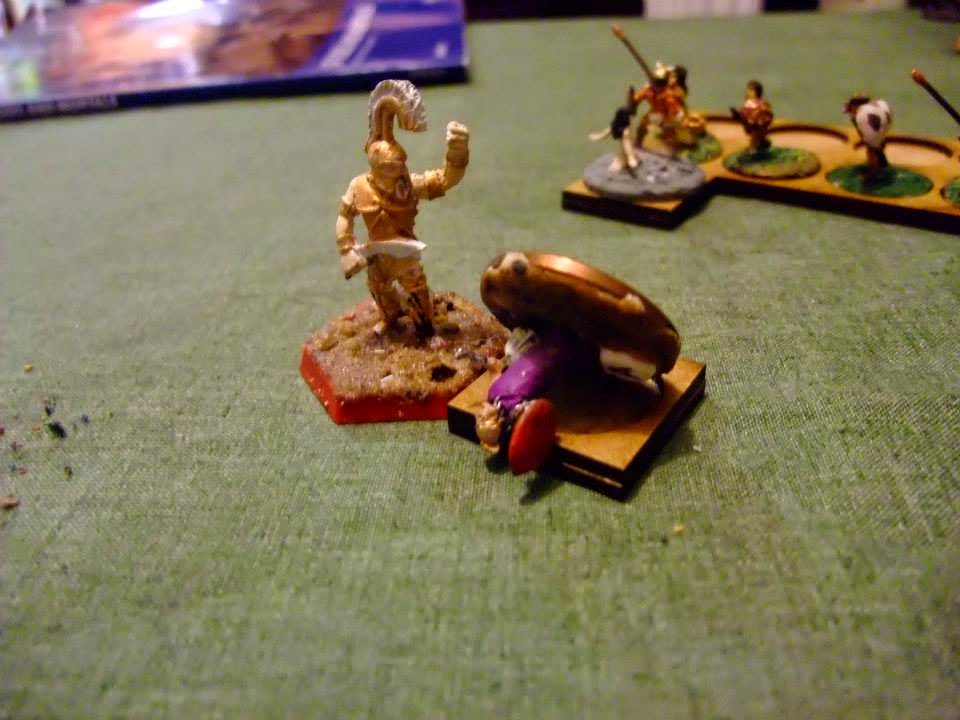 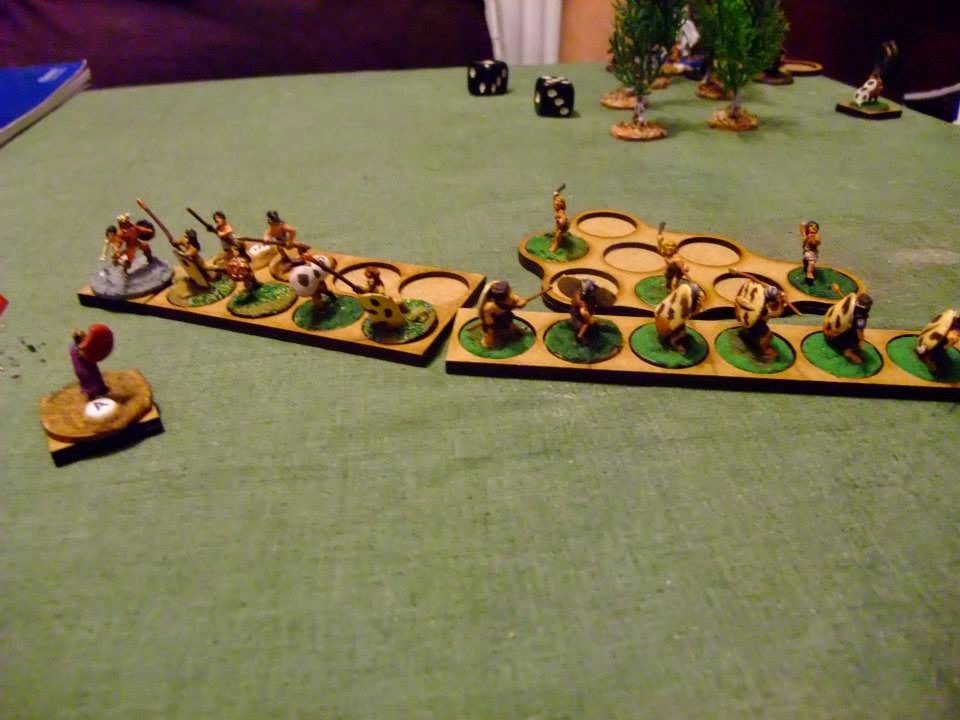 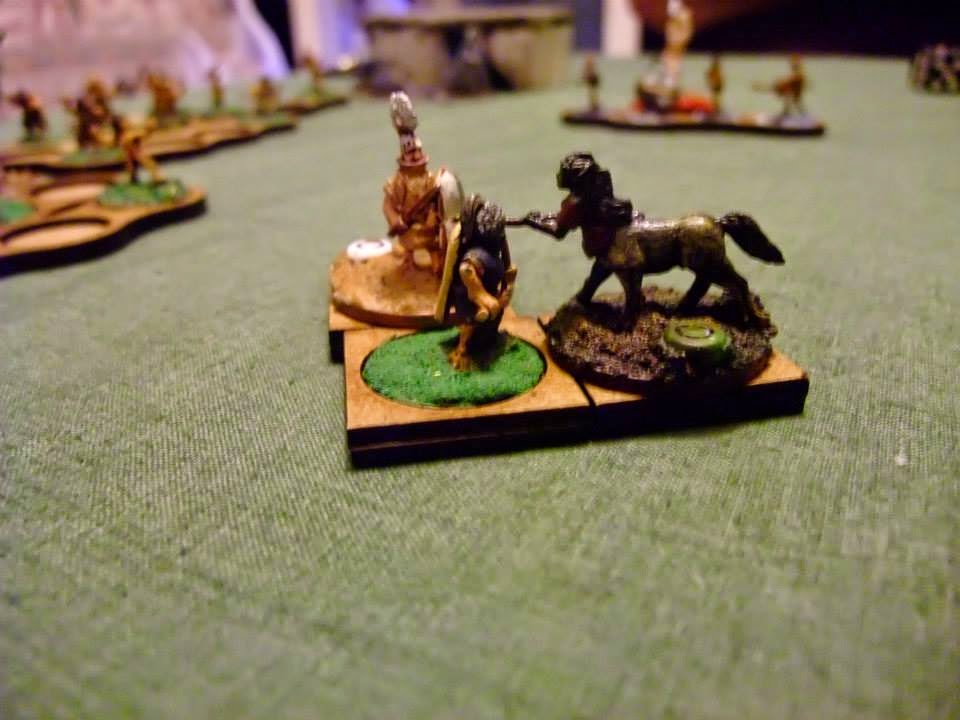 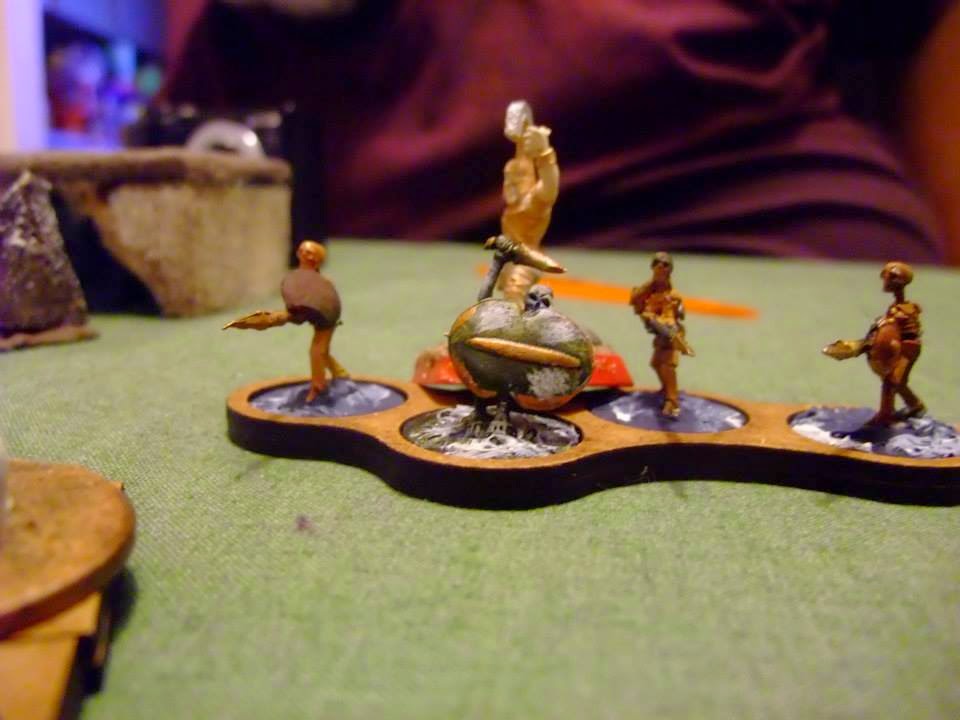 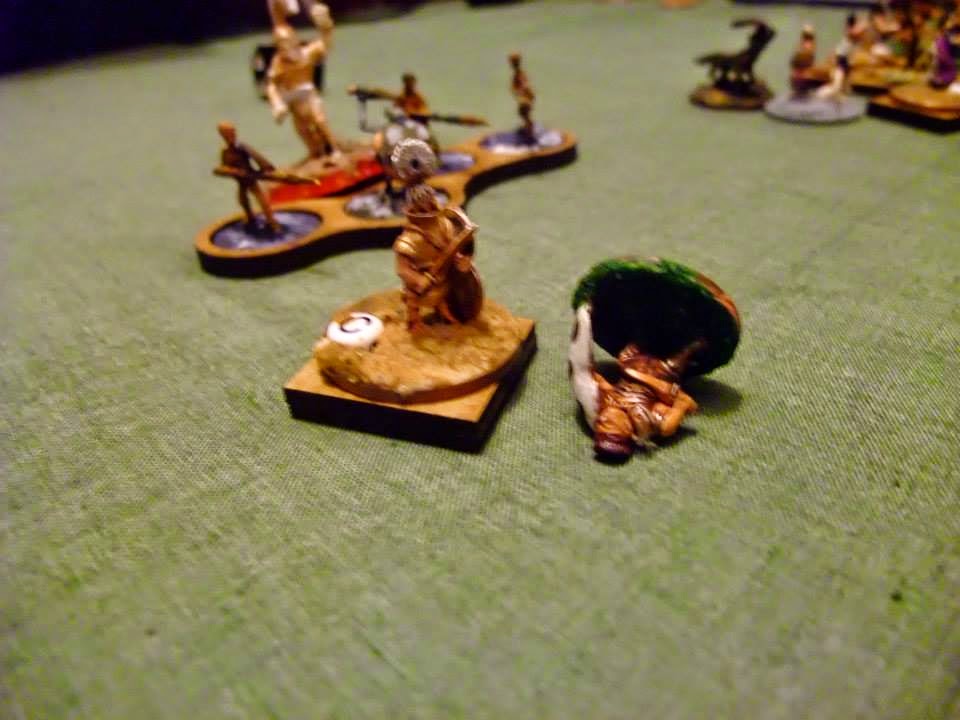