These forces were originally designed and costed for Ganesha's Flying Lead. (FL)


The first set of HTS standards uses the first version of the rules.


The second set is for HTS v2, which uses one Quality (Q) for everything.


Such units are usually up to strength but suffer from lack of veterans and specialists. Attached heavy weapons tend to be hatchlings or Uber Daleks.


Note. These mad creatures, on a roll of 1 will self destruct, on roll of 10 will advance 1 move & shoot. Do not give a cunning plan or leave at the back. HTS Q6 C3 A3 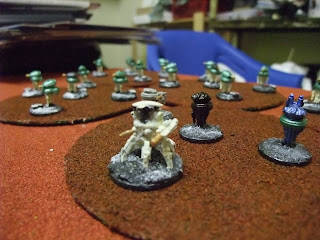 
These units are rarely up to strength, some going into combat with 50% hatchlings. This is offset by equipping with up-armoured travel machines. Heavy Weapons have a wider range of weapon choice and are usually recruited from experienced troopers who show no wish to go for rank. Officers and senior nco's are usually experienced or veteran, some having real charisma and the ability to inspire troops. http://www.mechmaster.co.uk/cg-lair/daleks/secemp466.htm 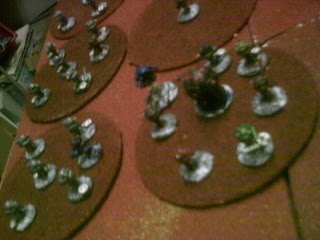 Standard energy weapon uses a laser carrier beam to deliver a lethal or stunning electromagnetic static pulse that causes disruption to nerves and electronics. This comes in two sizes, a small short range pistol and a larger top-mounted rifle. Some Guard units are equipped with two of the pistol size weapons to facilitate move-and-shoot without overheating.

Of 15mm Daleks and Me

The second episode of Dr Who, you had to be there. Zoom on to now and you have the excellent Dalek Second Empire, which has proved inspirational towards my latest Dalek wargaming project!

First off, there are no 15mm Daleks available. The BBC doesn't seem (in my humble opinion) to like the concept, as there are no licences available. Khurasan's Dethroids are NOT Daleks, and my use as a substitute is all me own work, Guv, 'onest.  http://khurasanminiatures.tripod.com/planet15.html
(about halfway down the page - ee keeps adding!  I keep wanting!) 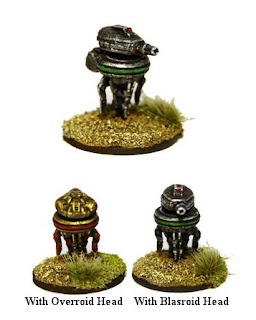 Here are some nice pictures of “straight” off the peg Exterminators.


Uber Dalek project. Originally these were my second attempt at creating a 15mm Dalek, but they are simply too large. I would suggest that if you require a 28mm Spider-Dalek these would fit the bill.


Here are some I made earlier.

(upgrading now!  watch this space, it's on the list!)

The recipe is quite simple, the base unit is a GZG spider walker, the top a slightly squashed recon drone. Shields are grav plates and a variety of weapons are from the bits box, gleaned from smaller, mostly GZG vehicles. Although you can buy separately from Old Crow and Combat Wombat.


Here's a batch of the newer code, made as a Heavy Squad HW Dalek, allowing the others to be used at Platoon level.


Of course I had to make an Emperor. I didn't need one, he's never likely to appear on the table. But he is there. Again all GZG model, the base is used as pillar for 25mm auto gun and ORC space station part. The top is from Germy's 2mm range, a circular dropship.


With these heavy weapon Daleks we will be invincible and take our place as the supreme species in the universe!


Now this is going to make me seem like a complete anorak, but I'm not, honest. My next project is to go through Dalek Second Empire and note the names, weapons and personalities. I will then present them as a package to be used with Ganesha's rules.
Posted by unitrecon42@gmail.com at 16:30 No comments:

My Dalek Backstory, or, if you cannot have the Daleks you want, rationalising the ones you have.

When you start to travel in time and space, strange anomalies can occur. Imagine now, dear reader, a Dalek fleet fleeing the Morvellan plague virus. Finally settling on a hostile jungle planet, they start to rebuild, growing in numbers and installing the most senior in a large static Emperor machine.

They are discovered and attacked by a strange humanoid creature who infects the drone's computers with a virus, making the Dalek creature react similarly to a human child. Fortunately the Black Daleks and Emperor are unaffected and after a brief struggle, order is restored. http://www.youtube.com/watch?v=URlwEkaFj7k

Damage has been done, the lasting effect of the virus is a change in perception, a dormant race memory of the presence of limbs has been awoken, the old travel machines feel like prisons. The Emperor decides to return to a spaceborn existence. New travel machines are constructed for a space environment based on a Spider-Dalek model. Later improvements include upgraded maglev motive power and a heavier weapons system capable of handling Mechanoids and other new foes.

A new Dalek Empire is formed. Followed by the revolt of its 2nd Conquest Army under General Xenol inspired by Science Dalek Yttral. 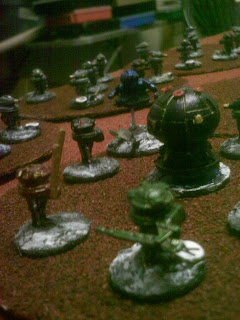