"He's not the messiah, he's a very naughty necromancer"

I have been challenged to turn this into a wargame.  Challenge accepted but I'd like to turn the cowboys into the more historically correct pirate.  If you cannot be yourself, be a pirate!  This would also make a good LARP as well-.


The mythical and historical background.
The main character is the usual amalgam of Judas the Galilean, leader of the Sicarioi Zealots, and his brother the Nazirite James usually given the Greek names Jesus Christ (Savior Savior) who is portrayed in the bible as a magician/mystic necromancer.


The cast
So we can carry on the same split, we need a magic user type and a heroic leader plus a band of liberation front supporters – it's beginning to look like the PLO from back in the day when being muslim wasn't as important as blowing people and planes up.


Other backgrounds.
I'd love to see a bollywood version of this.
Chinese with King Monkey and crew vs hopping vampires.
Baroque, hero tricked into pulling the stake out.
Victorian, an African Rider-Haggard setting, perhaps? I can reuse the Romans & Pirates! Imhotep-
WW2 Here's the perfect bad-taste use for Rebel's zombie Nazi's.
Modern, well we're into Buffy territory here.
Sf trans-genetic horror with a heroic captain and his science officer.


There are several rules sets in the Ganesha stable that will suit, so I'm going to throw the wosname on the water. Please, have a go and let us know what you do.


In 15mm there's some choice;
Irregular Miniatures have “generic muslim insurgents” in their excellent Colonial range.
Rebel's Egyptian civilians and diggers, mummies, Pirate and Nazi zombies.
15mm.co have a set of zombies that are generic (and open handed) enough to use
Museum Miniatures have hordes and dead that includes arabs.
Old Glory's Horror range has a few useful bits such as vampires and vampire hunters.


Romans are everywhere, I like the look of Splintered Light's auxilaries. But I cannot find any Roman zombies!


I feel the birth of the “Dirka Dirka Ghurka Shirkers” mob for my “not in 'er madges name” project.


Now where can I get 15mm add-on fish? Those plastic tubes of animals, I wonder if there's a swordfish?
Posted by unitrecon42@gmail.com at 12:44 No comments:

Flying Lead A Fistfull of Sheyang pt 1 - the APC 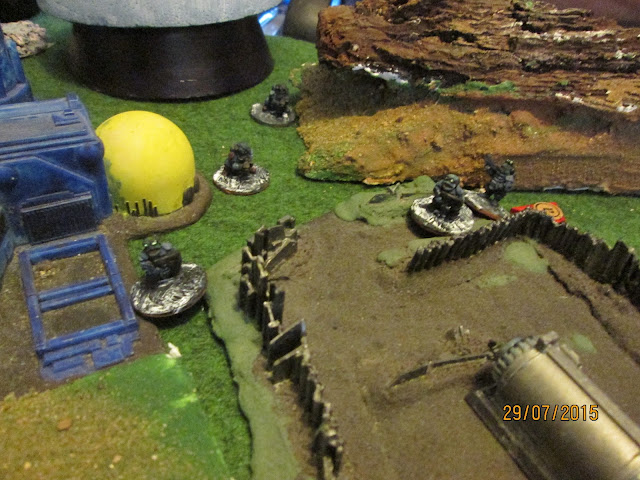 After a spell of OGAM fun, Tony wanted some more heavy weapon exchange. He also foolishly fancied fighting against a spider-tank. Oh my droogs, be very, very careful wot you ask for, 'cos you're gonna gettit, innit.

My followers on facebook may remember that I picked up a pack of during the 15mm.co's sale, and that I was bowled over by the quality of the casting and craftsmanship. As they say up north “'eeees done a cracking job”. Them what do say, say that after a hard days grafting 20 hours doont pit our Eli comes home and in his spare time (they say 'ees excused whippets, ferrets and pigeons) crafting these fine works from a stub of candle using a blunt pin, the treasured family heir loom.

Now I'm sure he had not been influenced by Farscapes Sheyang. But I am.
http://farscape.wikia.com/wiki/Sheyang


Here is my attempt at an away team, a small security force protecting the sharp end of the robbery. Imagine, if you will, a small mine processing Condominium, the fossilised remains of sea creatures compacted by ancient forces into strata, much like peat. Once processed this is an ingredient in the multiple herbs and spices added to chicken deliveries. We stumbled into the fast food militia for our Southpaw (Space Raptor) force by accident and now they emerge as a credible force with old equipment on a backwater planet. It takes a lot of chicken dinners to buy the latest kit. If you can imagine that the Swiss model adapted to local clan business. The First Armoured Merchant Bankers, the Uber Accountants.

I've had this idea for a world for some time. Imagine a tide locked large moon of a gas giant. An old world who’s invertebrate life has survived many extinction events. You would expect the dark side to be bleak and lifeless, but lets turn that around. There is a permanent wind so some species of plants cast a fruiting body to the breeze to land in the comparative safety, as few animals* can survive here, and grow before expelling their young into the wind. Nominally a Pan African Union colony, the uniqueness of the place has attracted several corporations, not always human. Not all of them behave in a legal and orderly manner. There is a low level bush war between the Southpaws and the PAU in areas of mutual interest. I note that Eli is working on a land mollusc range that would be ideal as an indigenous race. 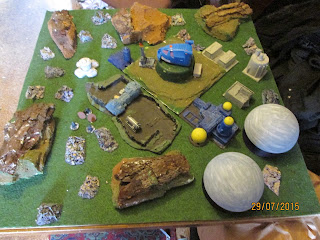 Back to the mine. Most is underground with some buildings at the top. As we are dealing with a food ingredient, the site is set up to deliver its product in sealed containers straight into a vehicle. The area around the mine is covered with slag piles. I'm cheating here, using some unfinished scenery to give the raw, ugly look such sites have. Plus, I dug my old Snapdragon scenery out that hasn't been tabletop for a decade or more. There's 36 scenery items vs 10 figures. That's skirmish, folks!

Sheyang. These guys are huge. Plus, each (male) has a breath weapon used in mating rituals and competitions, being used in a similar manner to the way a human male uses his farts. This is hotter in younger males, and not a stream like a flamethrower. I think the effect would be more like a shotgun. One side effect is that a gory death (6:1) will see ruptured glands resulting in a grenade style explosion. Their personal weapons I suggest are heavy slug throwers or grenade launchers aimed at breaking things up, making them easier to ignite. I've given 2 anti-personnel weapons and 2 armour piercing. If I've got this right, the normal Southpaw weapon should knock 'em down rather than killing them. Their running blow ability should get them in and out with some chance of survival. If against humans I'd use Short and Long respectively. For this game I was going to use Short and Medium to “stretch” the groundscale, but on trial reverted to long for the Raptors. I hope I've got the balance right, but as this is a fairly small game we can stop and/or rewind. Confidence is high. Sheyang 450 points, Southpaw about 700, which is about right although in real life you'd try for a 3:1 advantage but that doesn’t make for a fun game. 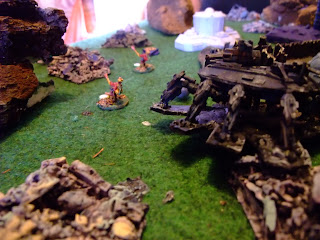 
We have already encountered the walker APC in use against the Llhurgs. So we can nick that. 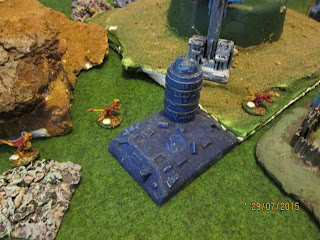 The walker tank gives a bit more planning. This is a regular model, not a command version.


Finally I had considered using a few of the open handed special ops as the company employees drafted in as scouts, using their local knowledge to get in the way. I'm presuming that they use civvy vehicles that will be parked safely. In use they ended up as crew. 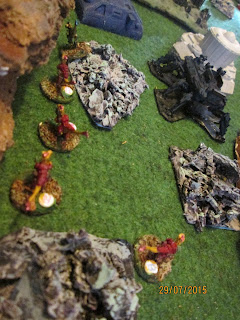 
Tony, not being Southpaws for once, set up away from the camp in cover. I started strong, so moved, unloaded infantry then moved on. Tony moved stealthily up while I moved into cover, the APC MG'd the side compound to bits then a grunt jumped the fence.

Tony's stealth approach payed off and Dancer shot my lead trooper and (in cover!) officer dead. Morale check, not too bad. The APC moved cautiously around the compound and Blitzun moved to a firing position, an aimed shot knocks the APC back stunned. The APC recovers and lets loose will all MG's – total fail, just a knock down, oh damn. 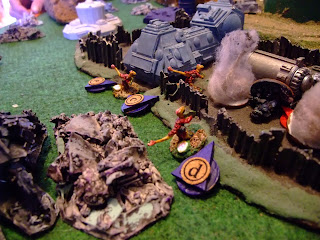 The  remaining raptors made for the APC (wouldn't you?). The first one does a running attack on the now recovered Blitzen which goes nowhere and gets the Sheyang equivalent of a Glasgow kiss – shoved against the fence and a face full of burning cud. The APC tries another round of Mg followed by a stomp attack while unleashing hell, killing Dancer and knocking Donner back into cover.

Donner recovers and shoots, doesn't penetrate but does enough that the crew bails. That gives Dasher the chance to do something (other than fail activations) holding his weapon in true arni fashion he kills the vehicle commander and driver. (SO useful having the weaponless SF) But now “Bomber” Blitzen shoots the rear fence, knocking down all the remaining raptors and badly wounding one. There followed a whole series of “to you-to me” failed activation results – so we gave up, I did manage to get one away. I need bigger gun!

You’ll note that a walker vehicle tends to act more like a very large character than other vehicles. This felt right, but Tony pointed out that I'd failed to take reload times for the breath weapon into account. The rules state that a grenadier rolling a 1 is out of grenades. I'll take that and consider that to last the game unless they can get a meal---. I'm also considering that a multiple 6's on Q requires an involuntary “burp”.
I need more of the SF raptors to turn into crew figures and we NEED an effective RPG in numbers. I could add some of the small walkers from GZG but I'm not sure if they would feel right. 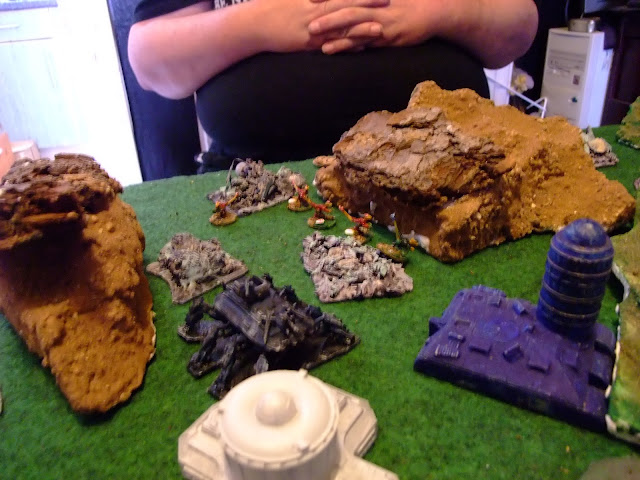 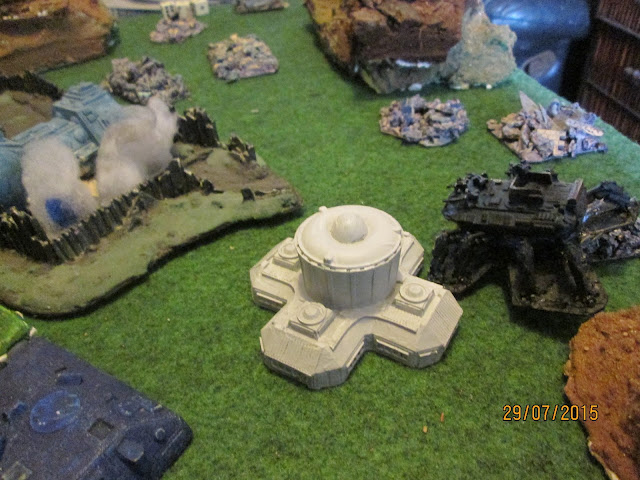 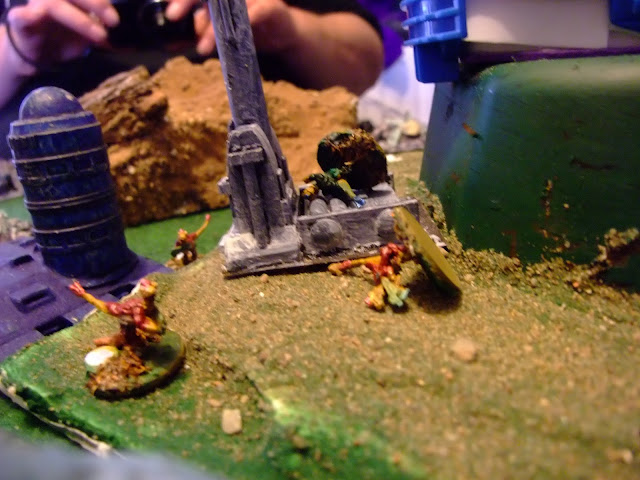 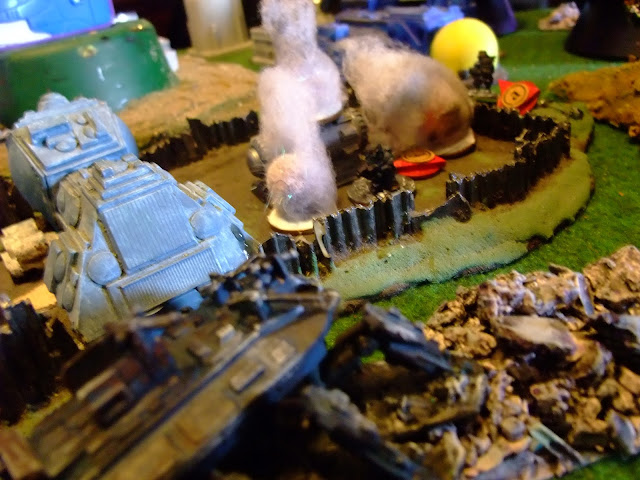 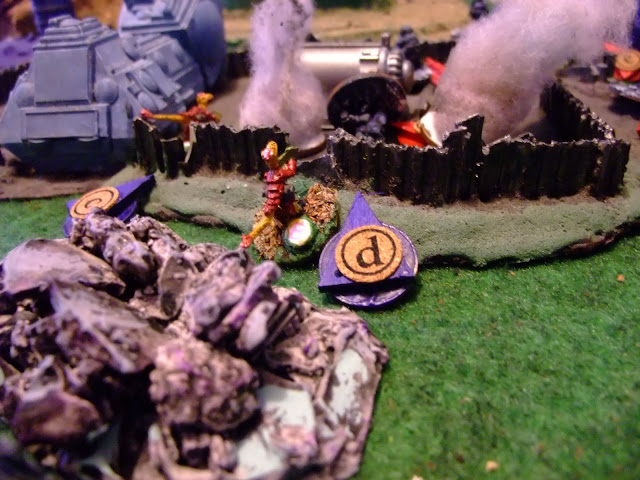 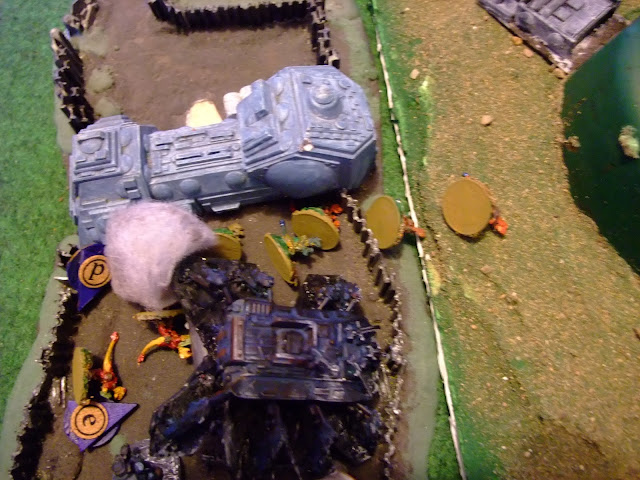 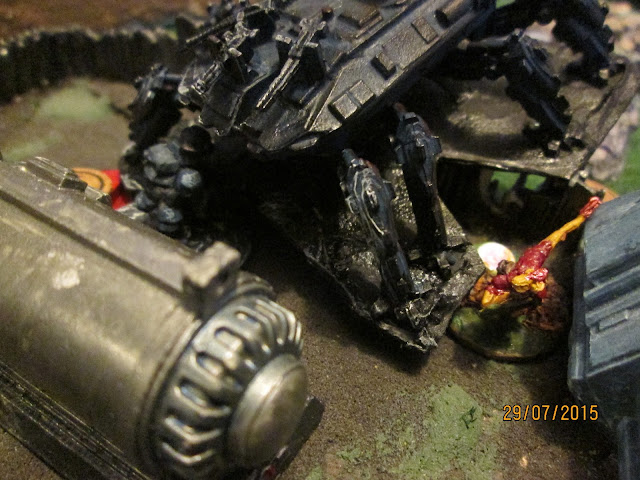 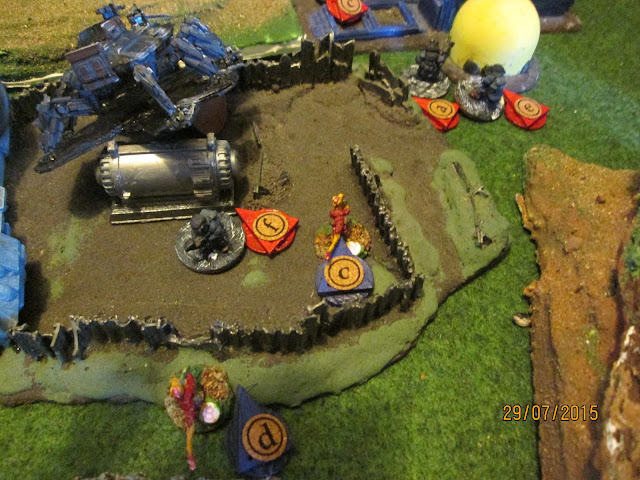 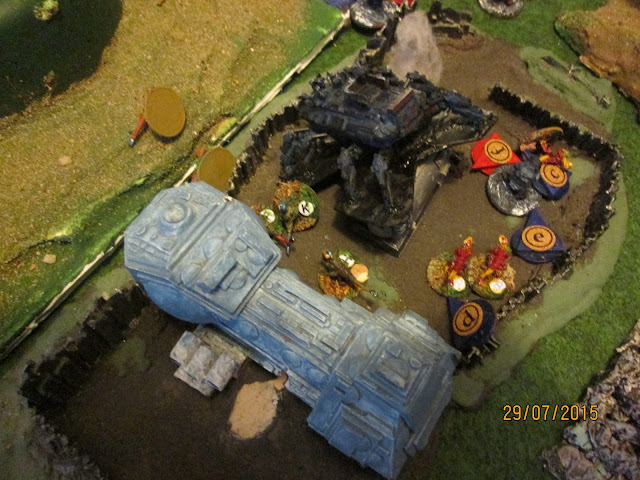 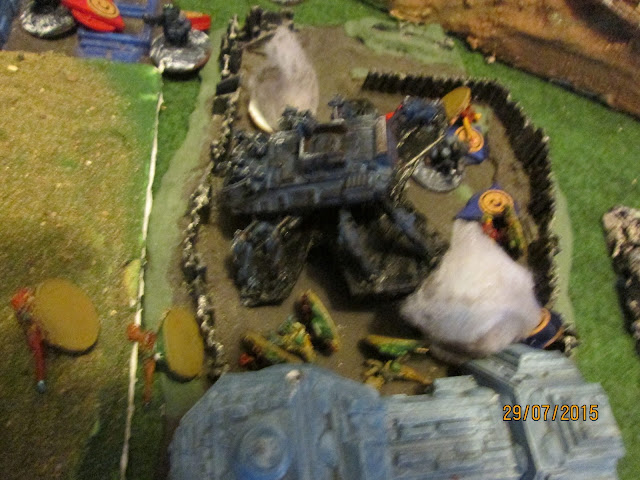 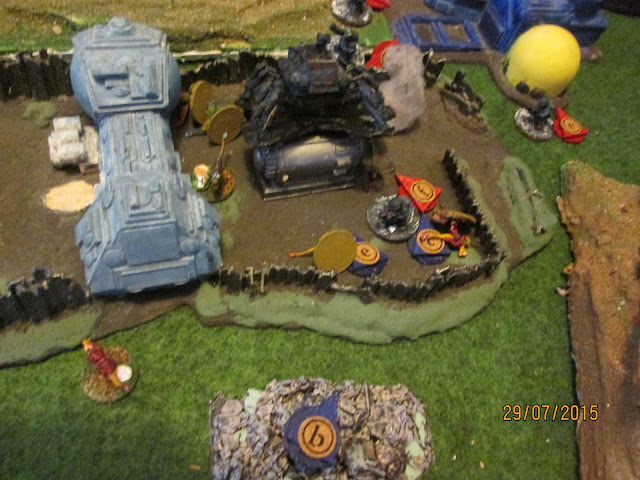