War of the Underworld Izanami vs Hades 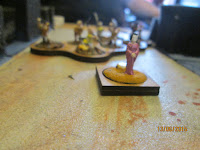 Izanami Q2 C4 Culling of the Weak, Confound, Tremble Before My Might, Sacrifice 280


Making choices. When you start with OGAM you'll find out that you have to be careful of who vs what. One of our first games was Hades vs Pan. Proved an interesting game but Hades had a lot of undead and Pan had a lot of archers – who are poor against undead.


Pay special attention to your Legends. You can have up to 5 but those can be a maximum of 1/3 of your force. So choose your god, then your legends – then multiply the legends total by 3. This gives you the minimum points you can spend on mortals. Watch out for gods like Pan or Hel, who's force must be 50% mortals.


In this game you'll note that Hades is without (living) mortals and the rest are high combat scorers. The reason for this is that Izanami's Culling the Weak will go through lesser beings like a katana through butter. The spider, Oni's and the samurai archers are a counter to the Gorgons. 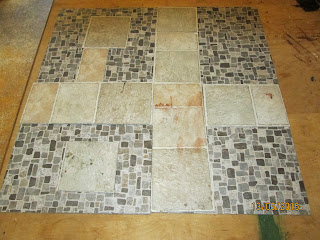 The Table. 'er in doors got an equipment case for her ghost investigation kit (a nice cheap hobby compared to wargaming!) So I got to “pull” all the foam – to make this hellish terrain. The bases are all (health lottery) credit cards coated with no-more-nails. Heightwise these are perfect, no problem moving figures at all. I was going to leave the bases unpainted, but then I realised that when stacked they didn't look good. I need a few more so I can stack higher. 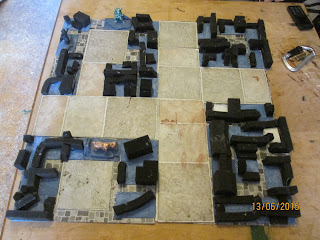 Four vinyl tiles make base and a couple chopped makes the road network.


For a “pure” Hades I have my Troy and I'm planning Japanese buildings soon as part of my on-going 7 Samurai series. 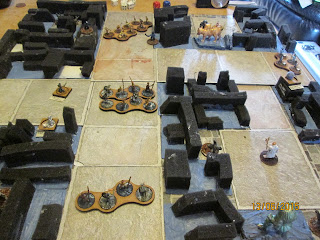 
Tony took the Japanese and me the Greeks (you didn't see that coming, did you?). He started by plunging an Oni into my skeletons, pushing them back for a loss of one. The other Oni and Euryale started their dance. 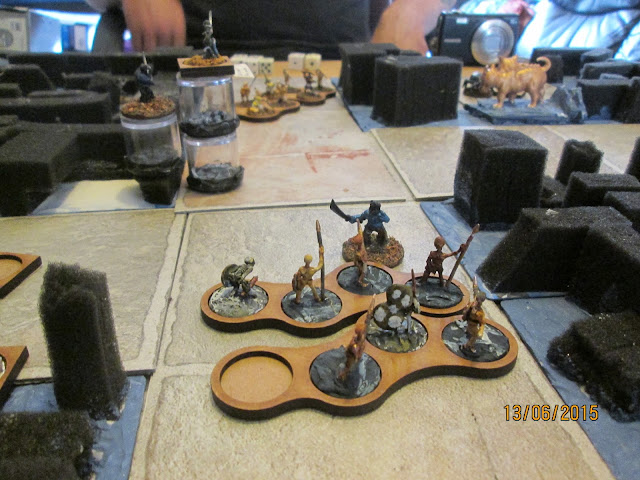 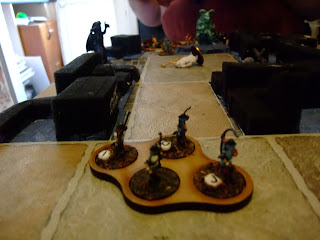 I should have learnt my lesson from before when Hades was taken out by a unit of Cyclopean (Cyclodedes, Cyclopedic, Cyclopi?)

Panic! My rearmost tactical reserve ran and the rest withdrew. Fortunately Tony had nothing able to interfere with my skeletons who were able to bring Hades back. 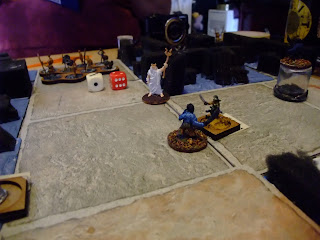 Stheno took on the lesser Oni and after a good knock about her armour served her in better stead than his larger size.


The Dai Oni was set upon by Hades and was dispatched. 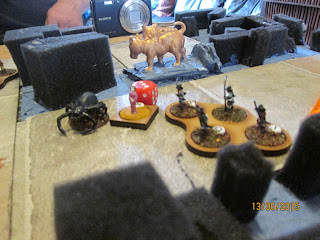 Tony marshalled his forces in the centre. I sent my ladies in, Stheno against the spider and the other 2 against the Samurai.

Alas, Stheno died to a 6:1. The archers lost one and were pushed back. The spider had got the taste and went after Medusa. 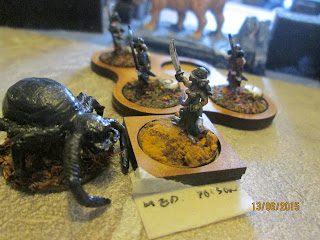 A three way knock down brawl ensued that ended with Medusa succumbing to the spiders deadly embrace.


That left Euryale unable to mix it, so she again ducked and dived, chased by a parting flight of winged death. 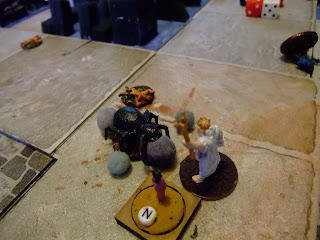 Mum told you about running with sharp thinks? Yes?

The spider did not have the benefit. Hurtling in to save his Goddess- squelch on the end of hades stick (I told him, you'll have someones eyes out with that, I did) our second 6:1 roll.


That left Izanami standing alone in front of her monks facing off Hades. (insert Enrico Morricone score of own choice here).
https://www.youtube.com/watch?v=j3caYkJ9iQ8&feature=youtu.be 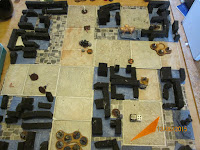 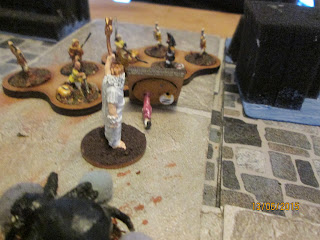 Hades came on like a storm, but stalemate! Boom and crunch! Buildings fly apart and the monks are awed. He knocks her back and then, she's dead! 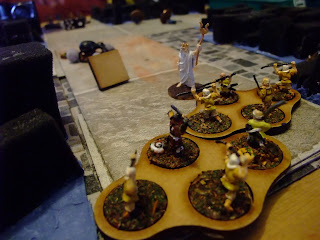 Now he turns on the monks, who just managed to “unawe” and did not flee.

Two punishing blows and three dead they are off the table, unable to invoke. I won!

This was the best OGAM game we'd played. The forces were well matched and most of the combats could have gone either way. 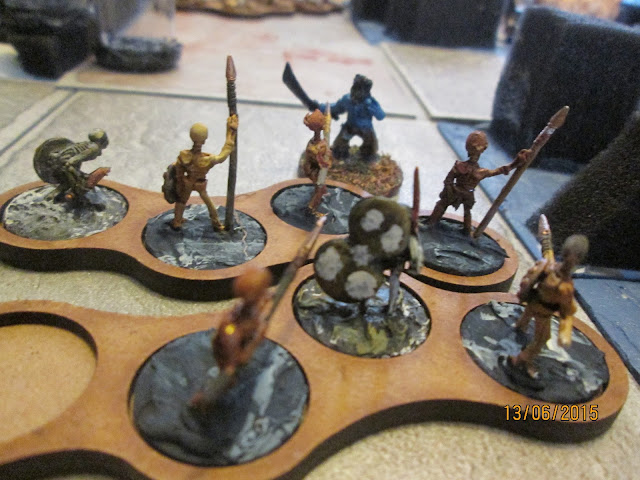 *I have the set of Rebel's Sea Witches that makes the perfect Gorgons – or sirens. I spent as much time looking for 2 of them as we did playing the game, You will see substitutes where more than one is in shot. My apologies. I thoroughly enjoyed using them, they're a well thought out team. Euryale in particular behaved as a Bronze Age attack chopper! 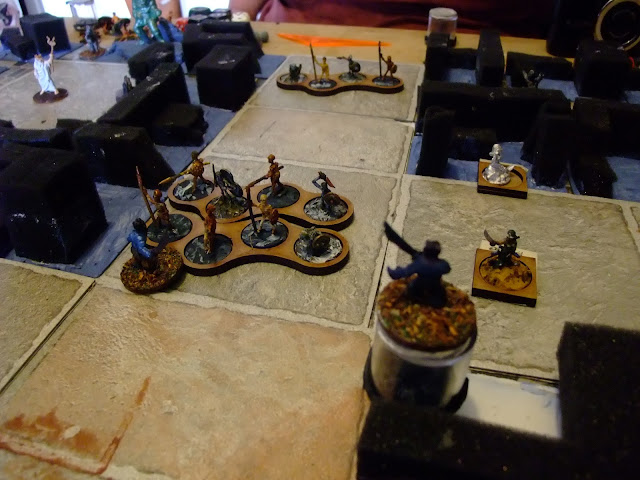 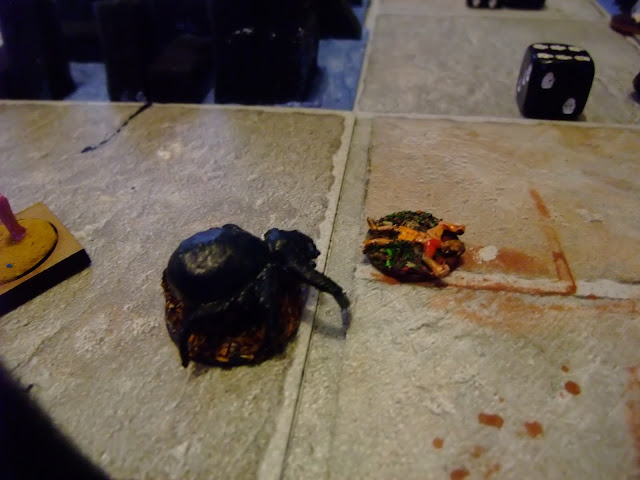