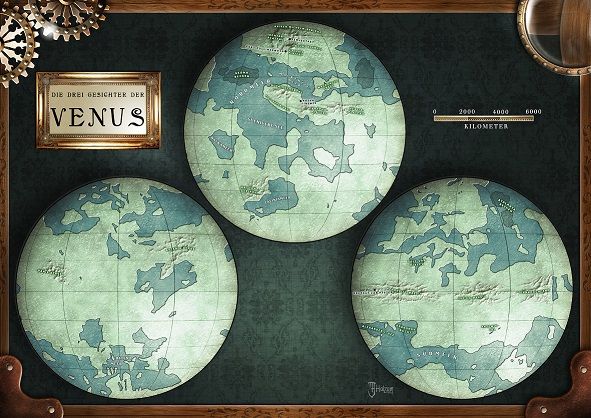 Dearest reader, let me import unto you the wisdom of the day.  Space 1889 is one of the oldest RPG games that has always been blessed with a wealth of support material.  I'm using the excellent Clockwork Publication Venus as reference.  Unfortunately now out of print, but you can get it as cheap as chips - so I have 2-. 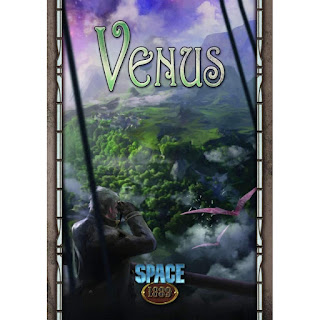 I'm using Rogue Stars because I have a player pool particularly potential per Poole.

You could use other rules.  Paleo Diet & Pulp would fit in.

You could even run the RPG.

I hope that these small games might lead onto bigger, possibly Flying Lead, games.

Motive for this little jaunt will be the Prototaxites connection.  Interesting mushrooms with a rejuvenating effect that even when dried are worth more than their weight in gold.

There is a growing multi-national secret society, based on the Freemasons, called the Morning Star Society whose aim is to deal with Venusian problems and opportunities in an "Venusian" way.  They seek to control the Prototaxites trade as a cash cow. 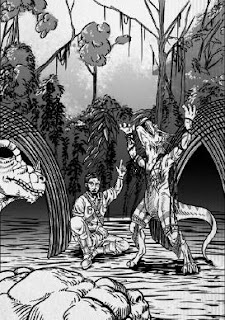 The Where is Finnegans landing.  An American outpost of the Venusian Mercantile & Trading Company.  There is trade between the Italian & Russian colonies as well as the locals.  I'm thinking "Hell on Wheels".

Almost by accident there are most of the locations in the rules here:

A large farm is being cleared & under construction. 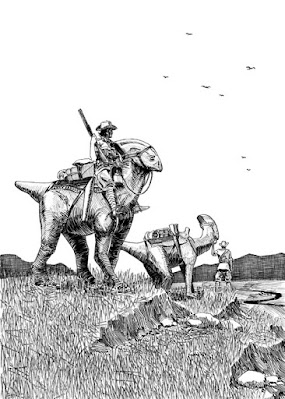 The Americans are not popular with the natives, as many of the staff regard them with the same contempt as Native Americans in their homeland.  A thriving big game hunting charter is having a marked effect on the local wildlife causing yet more conflict.

The smuggling and native labour has been taken away from the Americans by a shadowy boss who goes by the name of Mr Kaito Yamada.  Rumour has it that he is a Japanese Yakuza who was forced to flee his homeland.

The territory is disputed by the Italians, who wish to colonise the area.  Presence of an Edison founded laboratory as well as several embedded journalists with access to off-world transport has stopped any overt action.  But if the Americans were to lose their grip?  Armoured cars, troops on lorries plus a few machine guns and/or a light artillery piece.  There was talk of one (now) Major Custer being assigned to Venus after nearly losing his whole command.  He and his cavalry could turn up in the nick of time.  Perhaps he's already there, turning into a bitter, ambitious, dangerous drunk?

The Players.  Most of these would be human, but a sprinkling of natives would be present.  Their biology is different enough that you should cheat when adding native medics/shamen as "techs".

Americans.  Merchants.  Being rich, they could be very well armed.

Yamada gang.  Pirates or Mercenaries.  Probably all native and as well armed as the Americans.

Locals.  One favoured technique is to lure large predatory dinosaurs into enemy territory to cause disruption during raids.  Can you imagine a family of triceratops going wild for the equivalent of cat nip?  This fits in well with complication 19 "Space Demon".  Plus it explains how the Dominar managed to catch Godzillasaurus:   https://unitrecon.blogspot.com/2015/03/flying-lead-godzillasaurus-unchained.html

"Upgraded" by the Italians or Yamada, even caravan guards.  Possibly armed with German small arms.  If this seems weird, consider the Vietnamese hill tribes trained & equipped by the Americans. 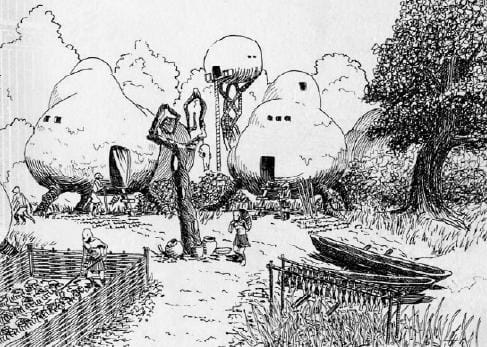 The toys.  I don't have any ACW/Western era buildings so I'll just have to get inventive.  I do have just a few dinosaurs.  One advantage of 15mm is that the smaller ranges fit right in.  As dinosaurs had the habit of "scaling" the same body plan it helps.  Plus this is Venus.  Your Brontosaurus lives in lakes.  T Rex stand tall like a  kangaroo.  Most are dirty green.  Locals are easy, I have a few (somewhere!)  of the Martian Empires excellent natives with rifles.  Tribal types I've the starter army from Battle Valour still in the bags.